The prime minister has altered his manner of communication after Erik Tomáš returned to the Government Office. 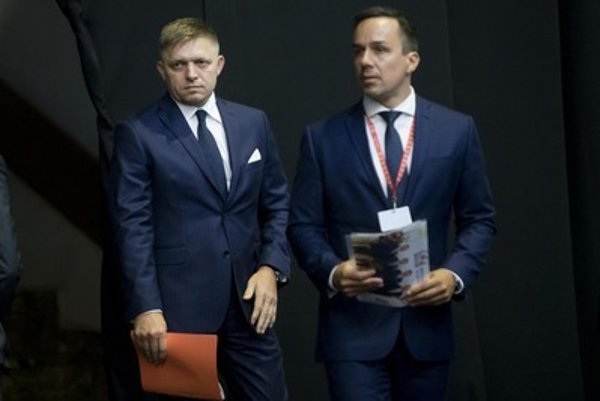 After a period of silence, avoiding journalists and sending messages through amateur video-recordings, Prime Minister Robert Fico has changed his communication tactics. He started providing interviews to media in which he threatened the UK for Brexit, stressed uncompromising stances of the Visegrad Group countries [Slovakia, Poland, the Czech Republic and Hungary] or openly criticised teachers.

Fico who made tired and resigned impression in recent months thus starts to resemble his form before the general election. The change in his communication can also be connected with the return of former state secretary (i.e. vice-minister) Erik Tomáš to the Government Office to the position of advisor for communication.

"Recently, Fico has presented himself as a strong leader in good condition,” analyst Martin Slosiarik of the polling Focus agency says. According to him, Smer is far from its “comfort zone” for preferences – this was when the party had around 35 to 40 percent. But it has not fallen considerably either, as a result of  one of the biggest scandals, the Bašternák case, which reaches also Interior Minister Robert Kaliňák.

This could have encouraged Fico to take a defensive position, according to Slosiarik. However, the premier still comments cautiously on the Bašternák case, and stands firm behind Kaliňák.

Several months after the heart surgery and after Tomáš returned from the Education Ministry to the Government Office, Fico started to give press conferences again where he answers some selected questions form journalists, and gives interviews.

In the British daily The Financial Times, Fico threatened that Brexit will be painful for the UK, and that the EU will arrange that it fares worse without the Union.

He also criticised teachers in an interview with the Slovak daily Nový Čas for having started their strike immediately after summer vacations, and he deems their protests illegal.

However, during the summer he rejected journalists, giving only press statements without possibility to pose questions, and did not comment on hot issues or the Bašternák case.

A similar twist in his communication came already in 2012. Months before the general election, he called journalist "slimy snakes" or "idiots"; but when Smer created a one-party government, he withdrew lawsuits against the media and invited them to a glass of champagne. Tomáš – who then led the press department of the Government Office – was behind the changes then too. Several months passed, and Fico again stopped communicating with certain media.

In the August poll of the Focus agency, Smer had 27 percent support; while the most recent data for September (27.7 percent) bring it closer to the party’s election result – which was 28.28 percent. The only party that has grown in preferences since it joined the government is the Slovak National party (SNS). Its boss, Speaker of Parliament Andrej Danko, recently admitted he had ambitions to become prime minister. Under his lead, the party stresses protection of national interests, in the refugee crisis and in the European Union.

"The most serious rival of Smer is now the SNS,” Slosiarik explains. “Both parties fight for the same type of voter, playing the national card.” He adds, though, that Smer can be in advantage in the fight for voter by its social agenda which the hesitant voters miss in SNS.

"There is no nervousness in Smer; it is absurd to perceive it as fight with SNS,“ says MP Ľuboš Blaha. The national orientation belongs, according to Blaha, to the “DNA of social democracy on Slovakia”, and security “ is now not the key issue, but is still here”.

Flašíková: We already lost the duel with SNS

It may seem outwardly that the Bašternák case has not undermined the cohesiveness of the party, as the Smer caucus came to Kaliňák’s defence. The deflection from social democracy and Kaliňák’s remaining in the position was recently criticised by Smer MEPs Boris Zala and Monika Flašíková-Beňová, however. After co-founder of Smer, Bohumil Hanzel, they were the next members to criticise the party publicly.

"There is something simmering in the atmosphere, and the criticism of MEPs is the proof of this,” Slosiarik opined.

Flašíková-Beňová does not perceive the repeated stressing of security and refugees as a chance to address the nationally oriented voters who hesitate between Smer and SNS. "We cannot compete anymore with SNS – we have already lost the duel with SNS when colleague Kaliňák did not resign,” she argued.

More crucial personal changes in the Smer leadership are expected at the December party congress. There, also the future of Kaliňák as interior minister shouls be solved.