Blog: Another day with empty streets

I arrived in Slovakia on January 6, 2000, after a whole night spent in the famous “Dacia” express train from Bucharest to Vienna. The streets were quite empty and most shops were closed. 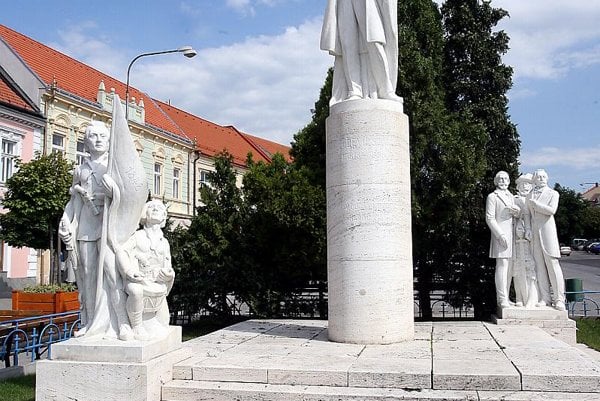 Under my report on how 27 leaders of EU’s member states met in Bratislava to talk about the future of Europe and how to bring the European Union closer to its citizens, one listener posted a comment: Yep, empty the streets of the capital, block the traffic, put police everywhere, tell schools to give kids a day off - this is how you bring EU closer to its citizens. Staring at some XL sized oškvarkové pagáče (a kind of flaky scone/biscuit made with ground cracklings from making lard) in a huge exhibition hall in Incheba with hundreds of other journalists around me, I remembered another day with empty streets. In fact, it was my first day in Slovakia ever.

I arrived in Slovakia on January 6 , 2000, on a train from Budapest after a whole night spent in the famous “Dacia” express train from Bucharest to Vienna. At that time Vienna was quite verboten for Romanians as we needed a visa to enter, so my fellow travellers Dana, Marius, Alina and I had to change trains in Budapest.

Marius, a pocket sized journalist from Constanta, was very eager to impress an otherwise grumpy Slovak border guard with “ Dobrý den, pane Rumburak!” as he was sure that the famous character from the Czechoslovak TV children series Arabela could only win us friends in this terra incognita. The border guard did not seem too impressed, and as he did not speak any of the many foreign languages that we spoke, he simply pronounced a stern “Nein Deutschland!”, which left us confused. But the train moved on, so we were kind of welcomed to Slovakia.

In my later trips to Brno and Prague I solved the mystery of the Nein Deutschland! - both Slovak and Czech border policemen and policewomen were not so much concerned that we entered their countries as much as they were with the possibility that we could transit them in order to illegally migrate to Germany. Even today some Slovaks can’t really understand why a European would choose their country as a destination, but that’s a story I’ll tell you some other time. To me one of the biggest achievements of the EU is that I don’t have to interact with border policemen.

Back to that glorious day of January 6 , 2000, as soon as we got off the train in Bratislava we noticed that the streets were quite empty and that most shops were closed, but did not pay too much attention (we had avoided changing money at the railway station thinking the rate would be bad and we would be offered a much better deal at a bank- a critical mistake as we were to discover a few hours later). We had to take a bus to Modra where we were stay overnight. Pán Rumburak and Arabela guided us to the autobusová stanica and Modra but could not prepare us for that lonely ulica leading to the vineyards and the famous Biocentrum dormitory. In Romanian the word ulica (spelled ulita) means an unpaved village street, usually dusty in summer and muddy in spring/autumn, and we had the revelation that we had found the source of inspiration.

Pulling or pushing luggage, depending on its size, we battled the icy wind and made it to what was once the legendary Biocentrum - the dorm of a former research centre linked to the agricultural high school next door. We felt victorious, but the day was not yet done with us.

As we explored the town, we discovered that we had arrived on a fateful date: January 6 th is a religious bank holiday in Slovakia and there was not a single shop open. We had finished the last of our food provisions somewhere in Hungary while admiring the Visegrad Castle through the window of the train.

Hungry, frozen and frustrated by not knowing Slovak to communicate with the rare passerbies, we found the only pub open in the flamboyant town of Modra. A quite rusty piece of metal with the inscription Hostinec gave us hope. For many weeks following we were sure that Hostinec was the name of the place rather than the general word meaning pub. Well, we were a bit surprised by the lack of imagination of locals who named their pubs ‘pub’ but we still had a lot to learn about locals’ imaginations. Back to that cold day in Modra, we managed to persuade the waitress to give us some food- simple scrambled eggs - but they tasted good, believe me. Looking back I think it was the first time I heard the word štamgast. Too much cross cultural shock for one day.

I went to Modra a few weeks ago and was surprised to find that ourhostinec is no longer there but is now a kebab shop. I find the recent popularity of kebab places in Bratislava and its surroundings a bit amusing given the official negative political stance of the Slovak Government and the opinion of a part of Slovak society on the culture of the countries where the kebab comes from.

But the food store which was open on Saturday only until lunchtime and closed on Sunday is still there, with the same strict schedule even if it has to face the competition of a retail chain which works long hours. I guess it must have really faithful customers who still keep it in business. It still sells a kind of fish salad with a lot of mayonnaise which probably could be used to train biochemistry students on recognizing all sorts of things. But we found it delicious back then (I haven’t touched it for years, by the way).

There are more ATM machines now in Modra but the hospital, or that medical facility resembling one, does not seem to function anymore. I will always remember that ambulance which came to pick our colleague Marius who had some cardiovascular problems- they simply locked the door after putting him inside because the back door ‘had the tendency to open just like this’.

Modra is still a wine centre. Ouch! This reminds me that I have to finish this text (and the adjacent glass of wine) because tomorrow I am going to an international conference on how to prevent chronic diseases via a healthy diet and lifestyle….Slovakia has chosen to present about alcohol consumption. Ok, I hear you laughing.

Anca Dragu is a journalist with Radio Slovakia International which broadcasts in Bratislava and its surroundings on 98.9FM in six languages from 6pm until 5am. You can find more info atwww.rsi.sk.