Signal in trains reduced by walls

When preparing its report, the RÚ used the results of the inspection carried out by the Czech Telecommunication Office. 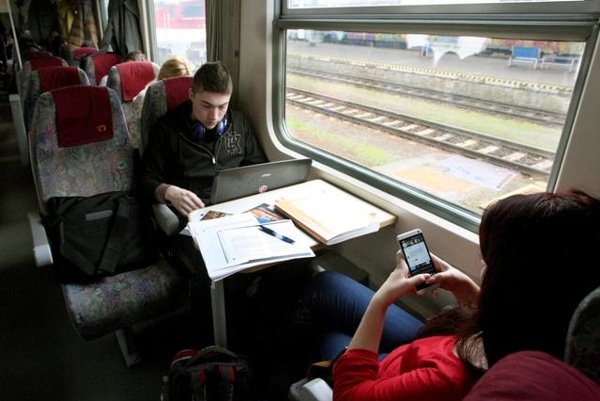 The walls of trains reduce the signals of mobile networks. This stems from an inspection carried out by the Regulatory Authority for Electronic Communications and Postal Services (RÚ) that focused on availability of internet connections and other electronic telecommunication services in trains.

“The coverage of inner spaces in carriages may be provided by using repeaters to intensify the signal or offering Wi-Fi to passengers,” said Roman Vavro, spokesperson of the RÚ, as quoted by the SITA newswire.

The authority has also turned to railway passenger carriers, asking them how they want to deal with the problem. The representatives of state-run carrier ZSSK as well as private firms Arriva, Leo Express and RegioJet responded saying they provide free Wi-Fi connections in their trains, Vavro added.

They all use signals offered by mobile operators.

When preparing its report, the RÚ used the results of the inspection carried out by the Czech Telecommunication Office (ČTÚ) which measured the damping of signal caused by the walls of carriages. It examined the nine most used types of carriages. The results suggest that the carriages cause a relatively large decrease in mobile signals, with older carriages transmitting signals better than newer ones, SITA wrote.

To use the results, RÚ addressed the Transport Authority that approved using the study also in Slovak conditions.