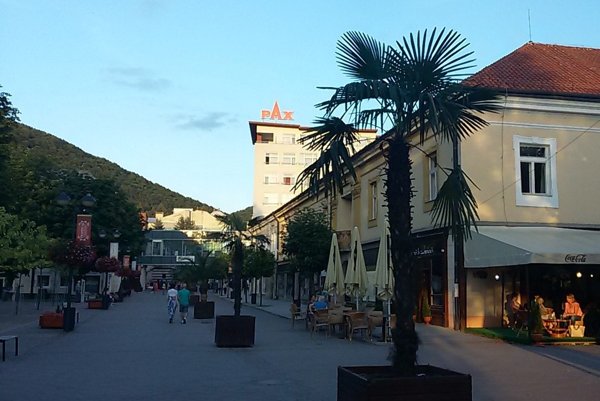 Trenčianske Teplice is a spa town that is past its glory days but is slowly being restored. There is not much there other than the hot water, accompanying hotels and spas. But the buildings are pretty and the setting’s great.

We set off the next morning after having a wonderful breakfast at the Penzión. Up of course and surprise surprise more trees. All three sizes. We got “roaded” again and much to our annoyance exactly where someone said that there should have be a sign. Clever little someone. There was a sign, we discovered it later, hidden by one of those tree wanna-be’s: a bush. Bastard. Other people had also missed the sign and set fire to it in protest. They should have been more biblical and burned the bush.

Trenčín is a Roman town or at least some Emperor or other left a carving on the cliff – “Julius wos ‘ere” type of thing***. Conveniently, they have built a great big hotel in front of it so you can go up in the lift and get a better view of the inscription. It’s a posh hotel but they showed us the way – so I guess anyone can go and see it. But probably (definitely) not worth a special trip. 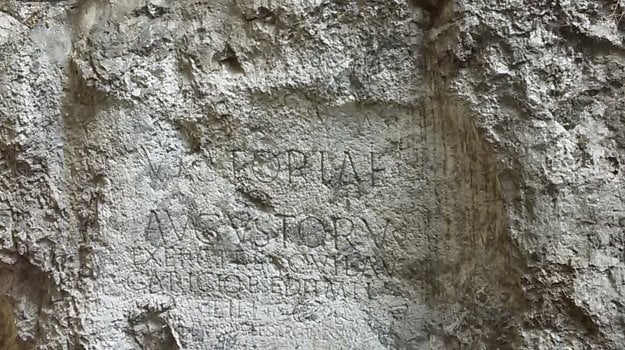 We found a little brewery in town that faked beer from around Europe. The wife and I got pleasantly tipsy – much to the shock and disgust of our children. Who no doubt had visions of carrying us back to the hotel, though the woods, up the hill, past the bush.

It was Roman week in Trenčín, or maybe this happened every week, so there was lots of entertainment Roman and not Roman related. A good afternoon was had by all, the sun shone, the beer had worked, and to the relief of the kids a taxi back to the hotel.

***The most important Roman epigraphic monument in Central Europe, North of the Danube, preserved “in situ”, in Trenčín. No I added that last bit.

I assume it made more sense to them.

“To the victory of emperors, dedicated by 855 soldiers of II legion of the army stationed in Laugaricio. Made to order of Marcus Valerius Maximianus, a legate of the Second Auxiliary legion.”

I assume it made more sense to the translator and the original vandal.

General comment:
To Ancient Rome (Trenčín)
We did this section backwards – it’s a tradition. Don’t ask.
Mount Mamostong Kangri – 7,516 meters the 48th highest mountain in the world. Running out of mountains, regretting starting this.