No plans for further staff protests at Volkswagen Slovakia

Measures to support senior employees are under preparation.

No further protests by employees of Bratislava-based carmaker Volkswagen Slovakia, are likely to take place in the near future, as the firm’s management and trade union are heading towards an agreement. The company’s trade union boss Zoroslav Smolinský informed the TASR newswire about the latest development.

“I think we’ve made headway, as the management has accepted some of our points,” said Smolinský. “It considered the current situation in the factory, and we’re jointly preparing measures to support senior employees. All the points concern social welfare and improving relations between the management and workers.”

Hundreds of members of the staff at Volkswagen Slovakia joined a protest in front of the factory in Bratislava on September 13 over what they call discrimination against longer-term employees by the management. 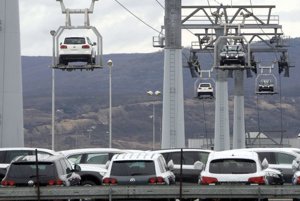 Some employees are uneasy over the fact that the management is giving out extraordinary perks in order to attract new employees. As opposed to existing staff, new employees are entitled to free transport for six months and a one-off bonus of €500. The union calls this discrimination.

Despite the progress in negotiations, the management has not admitted engaging in discrimination, said Smolinský. The union wanted to prove this and so appealed to institutions and authorities that deal with such problems to assess the current situation.

“In no way do we want to take benefits away from new workers,” he said, adding that quite the opposite is true, we want senior staff to feel that their employer needs them as well.

The next meeting between the trade union and management is set to be held next week.