Adam Sterling took the post after the departure of Theodore Sedgwick in early summer 2015. 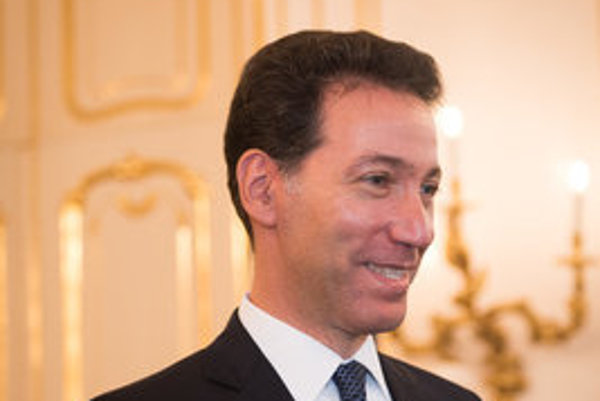 The United States has sent an ambassador to Slovakia after a hiatus of more than one year. Adam Sterling took up the post which was left vacant after the departure of Theodore Sedgwick in early summer 2015, a few weeks ago.

Such a long period without an ambassador does not mean that the US wanted to make any kind of statement about US-Slovak relations, however, Sterling told the TASR newswire in interview.

He noted that it is actually quite common for US embassies to have such gaps because the ambassadorial selection process in the United States is quite long. Unlike in other countries, all US ambassadors – following their appointment by the president – have to be approved by the Senate, which means that the process of evaluating nominees takes a long time.

“The last two embassies I worked at had longer gaps than one year,” noted Sterling.

Sterling served as Deputy Chief of Mission and twice as Charge d’ Affaires in the Netherlands (2013-2016) after holding the same posts in Azerbaijan (2010-2013).

In Slovakia, which is the diplomat’s first ambassadorial assignment, Sterling wants to focus both on political and economic issues, apart from people-to-people issues.

“I realise that there are no clear dividing lines between those areas,” Sterling told TASR. “Businesses look at the political environment when deciding on investments.”

Meanwhile, the nature of people-to-people relations effects how governments work together, and how governments understand each other and each other’s values, Sterling pointed out. The American ambassador noted that he does not have to deal with any urgent issues in Slovakia, so this allows him to focus more on learning about Slovakia and the US-Slovak relationship in the early weeks and months.

“There are bilateral issues between our countries as well but as with other countries that share our democratic values, our focus is on what we do together in our larger community,” said the American ambassador.

Slovakia, as the presiding country of the Council of the EU, has the opportunity to build consensus in the EU on many important issues that the United States is working on together with the European Union, he stated.

“For example, we hope that during Slovakia’s EU Presidency, we can conclude the TTIP negotiations,”  Sterling said. 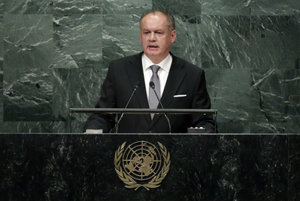 Other key issues, also labelled by Slovakia as its priorities at the helm of the EU, include advancing single-market initiatives, such as the digital single market and the energy union.

“Finally, there’s the work the EU is doing in Europe’s East, particularly in support of Ukraine and maintaining consensus in the EU on how to respond to Russia's aggression,” said Sterling.

The United States has highly praised Slovakia’s contribution by ensuring a reverse gas flow to Ukraine two years ago.

Meanwhile, concerning the planned Nord Stream 2 gas pipeline project - which would leave Slovakia bypassed, thereby causing it a significant financial loss - the US “will do a lot more than just put in good words in favour of Slovakia”.

“The United States stands firmly on Slovakia’s side in opposing the Nord Stream 2 pipeline. We very much admire the leadership that Slovakia has shown within the EU on this issue. Nord Stream 2 would have very serious economic consequences for both Ukraine and Slovakia, and it would also undermine the fundamental principles of European energy union for diversifying supplies of energy in Europe in terms of kinds of energy, source countries and transport,” stressed Sterling, pointing out that the issue is also about Ukraine’s stability.

“Apart from securing the reverse gas flow, Slovakia has provided other support to Ukraine, most notably in supporting the sanctions regime against Russia for its actions in Ukraine. Going forward, it will be important maintaining unity in the EU on holding Russia accountable for its aggression, in insisting that there will be no relief from sanctions until Russia meets its Minsk commitments and withdraws its occupation of Ukraine,” said Sterling. 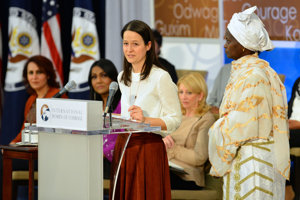 When it comes to migration, “Washington fully understands the extraordinary challenges that Slovakia and our other European partners face from the migration flows,” said the ambassador in response to a question on the security dimension of the migration crisis.

At the same time he added that apart from meeting the target of receiving 10,000 Syrian migrants for 2016, as reported by President Barack Obama in late August, the US is going to exceed the figure in 2016 and those numbers will be even higher in 2017.

The US has also provided some $5.6 billion in humanitarian assistance to Syria’s neighbouring countries since the beginning of the conflict five years ago.

“That’s the highest contribution provided by any country,” highlighted Sterling, adding that the US is also showing leadership in diplomatic efforts aimed at settling the conflict in Syria, which is one of the causes of the migration crisis.

Even before Sterling’s arrival, the US Embassy provided grants to Slovak NGOs working on humanitarian assistance and organised programmes to train local officials on how to work with refugees.

“A very important step was the recognition that the United States gave to Human Rights League’s Zuzana Števulová, who received an award of the State Department from State Secretary John Kerry for her work,” said the ambassador.