The completion of the Svrčinovec-Skalité D3 highway stretch has been delayed by six months. 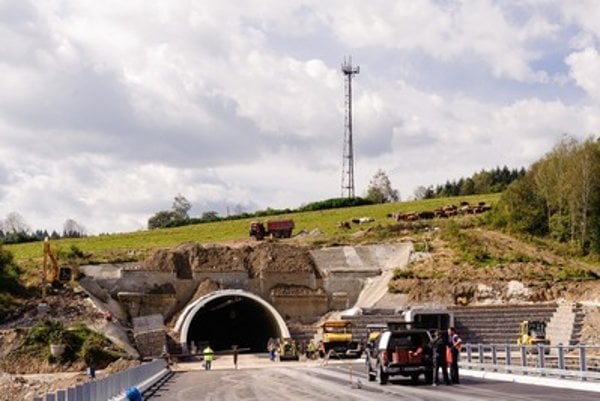 The road is now expected to be finished in May 2017, Transport Minister Árpád Érsek (Most-Híd) told the TASR newswire when inspecting the site on September 23.

“Various things have had to be done additionally to be able to connect [the stretch] to a short R5-expressway stretch on the Czech side,” he said. “Nevertheless, the main thing is that they’ve promised us that it will be resolved and in order by the end of May,” Érsek said, adding that the construction of this particular D3 stretch (Žilina region) and the entire motorway is considered a priority by his ministry.

“It’s an important part of transit transport with regard to a strategic connection between Slovakia, Poland and the Czech Republic,” the transport minister explained. “We’ll do everything possible in order to see the stretch put in operation as soon as possible.”

The more than 11-kilometre stretch, financed from EU funds, is quite a difficult one, featuring 22 bridges and two tunnels.

This section should have been opened for operation together with the connected stretch, D3 Skalité – in the Slovak-Polish border, also in half-profile and 3.2 kilometres long. The deadline will not be met due to problems with geology and landslides, the SITA newswire wrote.

The stretch of 11.3 km will be built in half-profile, while the junction Svrčinovec, including connecting the sections of tunnels Svrčinovec and Poľana, one kilometre long, will be done in full profile. The Svrčinovec junction is to be connected to the planned section of D3 Čadca, Bukov - Svrčinovec, which is currently in a public procurement process by the National Highway Company (NDS).

The problems causing the delay are connected with a change in the traffic model and adaptations caused by the connection with the R5 dual carriageway to the Czech Republic,  as well as the difficultly of the construction environment itself.

"It is a hard ground, made of flysch,” the main engineer of NDS, Ján Konštiak told the Pravda daily. "Currently, the upper surface of roads are being made and insulation, retaining and security elements on the highway are being finished,” Konštiak offered as examples of work being done.