The informal meeting in Bratislava of EU trade ministers and the European Commissioner for Trade Cecilie Malmstrom brought decisions about two crucial agreements – and a protest by Greenpeace. 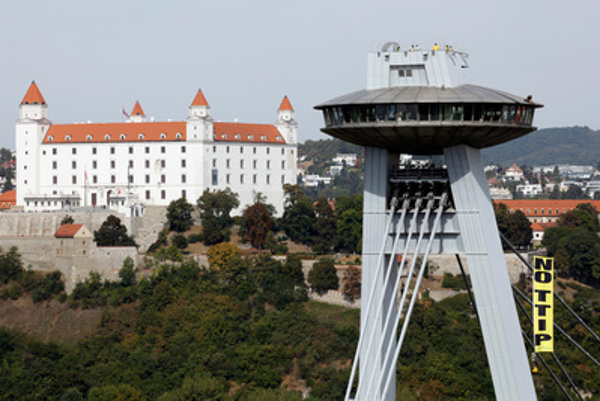 The Comprehensive Economic and Trade Agreement (CETA) between the EU and Canada should be ready for inking by October 27, Slovak Economy Minister Peter Žiga said following the informal meeting, on September 23.

CETA, as a modern trade agreement, has strong support of individual EU member countries, the Slovak minister added. “A few issues in CETA still remain to be finished, including the so-called provisional application. Nevertheless, we need to resolve this issue as soon as possible,” Žiga told the TASR newswire.

“If we didn’t manage to reach an agreement with Canada, then I don’t know any other country Europe would be able to agree with. Canada is close to us both in cultural terms and other values. I don’t see any reason for CETA not to be finalised by late October,” the minister said, noting that Canada represents a market of 36 million people.

“We’ve concurred with the European Commission that there are some spheres in CETA that are being viewed particularly sensitively by the public,” he said. “The European Commission will prepare, therefore, a joint declaration to explain the disputed points. This includes services, investment protection, international legal disputes, and labour and environmental standards.”

An extraordinary meeting of EU trade ministers has been convened for October 18 to approve and sign CETA. “I expect that the agreement will then be signed at a summit of representatives of the EU and Canada on October 27,” added Žiga.

It is unrealistic, however, to expect that negotiations on the Transatlantic Trade and Investment Partnership (TTIP) between the EU and USA will be completed by the end of 2016, Žiga said on the same day.

“It emerged from the discussion between the ministers on the state of the talks that a conclusion of negotiations with the USA by the end of this year is unrealistic,” said the Slovak minister, adding that the treaty must be properly balanced and beneficial for the EU, with quality of content being given preference over speed. “We’ve shifted the debate on the agreement further. It will be discussed by top officials of individual countries at the Council of the EU on October 20-21 with prime ministers taking part,” he added.

Meanwhile, economy and trade ministers will discuss the issue further on November 11, taking into account the results of the summit.

“The trade agreement of the decade has been delayed indefinitely,” the Pravda daily announced on September 24, commenting on the results of the informal meeting. Bigger liberalisation of trade between the EU and the USA has met with the resistance of several European countries, it wrote, and the Transatlantic Trade and Investment Partnership (TTIP) will not be adopted in the following years, according to some EU trade and economy ministers who met at the informal meeting in Bratislava on Friday. Several countries, including Luxembourg, Slovenia, Austria and France, are against it. As a result, the original plan, that TTIP would become effective as of the beginning of this year, i.e. during the governance of US President Barack Obama, definitely became unrealistic, Pravda wrote. Germany and its Chancellor Angela Merkel want to continue in negotiations.

During the September 23 meeting, ten Greenpeace activists from Slovakia, Austria and Croatia climbed up to the UFO restaurant on top of the SNP Bridge on the Danube River in Bratislava to unveil a ten-metre banner stating “No TTIP”. The move was aimed at sending a message to EU economy and trade

The ministers holding a session in the Slovak capital know that Greenpeace disapproves of the TTIP and the CETA, TASR was told by Greenpeace Slovakia spokesperson Miroslava Ábelová. “Both these treaties are being decided by politicians behind closed doors,” she explained.

“Such trade agreements could affect the quality of our lives; for example, TTIP could result in Europe being flooded by low-quality food with lower standards in terms of controlling the use of pesticides and growth hormones. In addition, it could jeopardise the businesses of small and medium-sized farmers," said Greenpeace’s policy coordinator for central and eastern Europe Júlia Sokolovičová.

“The ministers have the chants of all the people who have taken to the streets ringing in their ears,” Greenpeace trade campaigner Susan Cohen Jehoram announced in a press release. "They can protect democracy, our health and the environment, or they can allow powerful corporate lobbies to dictate policy through these trade deals. If they squander this chance they will sink Europe’s credibility even further.”

Meanwhile, according to Greenpeace, a recent study has shown that CETA could have a negative influence on employment in Europe. Research by Tufts University found that, by 2023, 230,000 jobs will be lost as a result of CETA – 200,000 of them in the EU.