Protest for a better country on SNP square

Organisers described the event as a non-political protest. 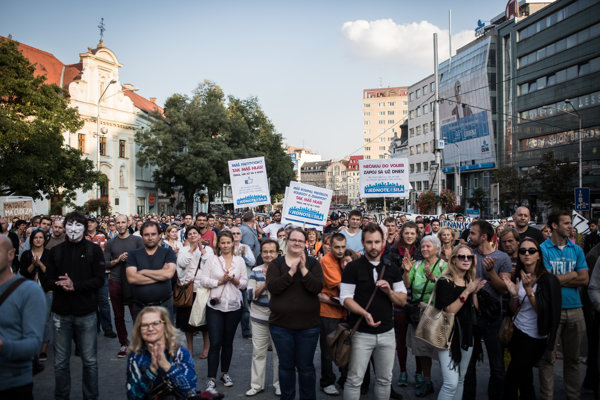 Some 500 people gathered on the SNP Square in Bratislava on September 27, seeking improvement of the situation in the state. Artists, musicians and public personalities attending the protest have rejected the government of oligarchs where affiliation with the party and cronyism rule instead of democracy, the Sme daily reported on its website.

Organised by civic activist Monika Kozelová, actor Richard Stanke and Táňa Freylich, the “We Want a Better Country” protest did not have any political background.

Protesters could listen to the speeches of Stanke, one of the faces of the Velvet Revolution and former politician Milan Kňažko, writer Michal Hvorecký and graphic artist Rudo Sikora. Also mother of under-age girl Natália, who was allegedly abused in the resocialisation centre in Galanta (Trnava Region) held a speech. 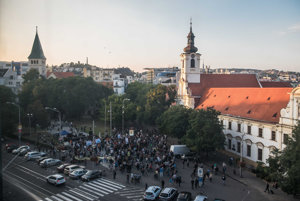 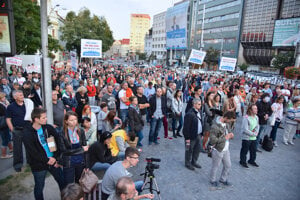 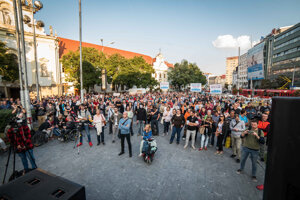 The organisers called for respecting the opposition and depoliticisation of the courts, the police and the public-service media. They have also asked for immediate reconstruction of the social system to the benefit of citizens, suspension of the elimination of the middle class and of small and medium-sized enterprises, protection of natural resources and of national cultural heritage.

The protest was initially supposed to be organised before the summer holidays but, due to Bonaparte protests, they rescheduled it, Kozelová explained.

“There’s no extreme initiative behind this,” the activist added, as quoted by TASR. “These people are just individuals who have grown sick and tired of this and have merged into one unit.