The September 27 meeting of EU defence ministers is important regarding the steps to be taken in defence cooperation. 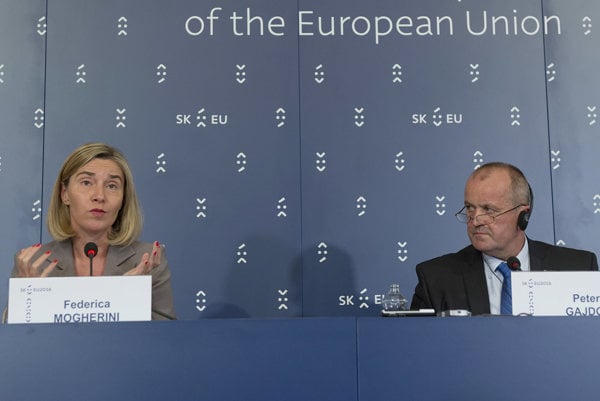 Slovakia has contributed €50,000 to the training of the Libyan coast guard, said Slovak Defence Minister Peter Gajdoš (nominee of the Slovak National Party) after an informal session of EU defence ministers in Bratislava on September 27.

Moreover, Slovakia is ready to send its military police officers to serve in the Sophia naval operation in the Mediterranean Sea targeting the network of people smugglers.

“Slovakia, the Slovak Armed Forces and the Defence Ministry all have to focus on the creation of armed forces and their modernisation,” the minister said, as quoted by the TASR newswire. “This way we can contribute, including the allotment of a sufficient amount of financial resources.”

Slovakia also participates in the ALTHEA operation in Bosnia and Herzegovina, and has entered into the Eastern Partnership Technical Assistance Trust Fund, which supports the participation of Eastern Partnership countries in activities involving the EU’s common security and defence policies, Gajdoš said, adding that the country will contribute €20,000 to the fund.

High Representative of the Union for Foreign Affairs and Security Policy Federica Mogherini described the September 27 negotiations in Bratislava as highly important in terms of further steps to be taken in defence cooperation. The EU defence is made up of three pillars – implementation of EU global strategy, the European defence action plan supporting the defence industry and new technologies and implementation of the Warsaw Declaration concerning EU-NATO cooperation emanating from the July 8-9 NATO summit, she added.

The ministers did not discuss the creation of a joint European army at the session in Bratislava.

“I’m very clearly stating that I didn’t hear a single word uttered about vetoes, or blocking the European armed forces during the three-hour discussion,” Mogherini said, as quoted by TASR. “This isn’t about European armed forces but about strengthening of defence cooperation within the EU.”