Some tax changes satisfy, others annoy 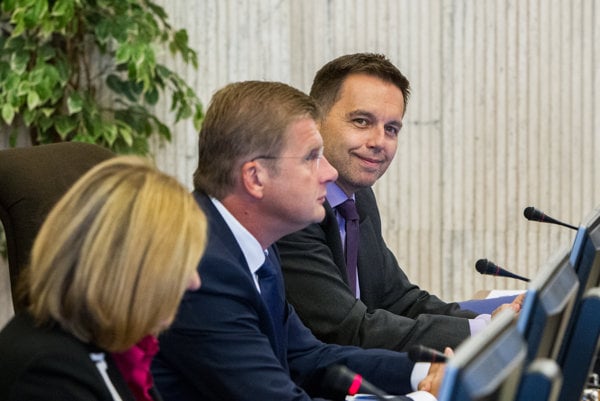 As promised, Prime Minister Robert Fico's cabinet has adopted several tax changes to make the life of business people in Slovakia easier. But while the slash of the corporate tax has pleased companies and increase of flat-rate expenses caters to the self-employed, tax experts criticise introduction of a new tax, on dividends, which actually interferes into the principle of one time taxation. Insurance companies and companies from regulated sectors are also displeased by the changes as these either introduce new tax duties for them or increase existing ones. Tax experts are also criticise the frequency of tax changes in Slovakia.

The idea of the cabinet behind the tax changes was to help especially the self-employed and small and medium-sized entrepreneurs. It adopted the draft bills on September 21.

“We had agreed upon reduction of the tax burden for some groups [of taxpayers] what in the end would amount to about €250 million annually or about €1 billion for the whole election period. This is not a small amount of money,” said Finance Minister Peter Kažimír as cited by the TASR newswire.

The governing coalition’s right wing parties pushed for the flat-rate expenses scheme are rightist parties in the coalition, the Slovak National Party and the Most-Híd. Meanwhile, Fico’s Smer party pushed through the tax on dividends.

The Business Alliance of Slovakia (PAS) welcomes the changes in corporate tax and the flat-rate expenses scheme believing that these changes will improve the business environment in Slovakia. But it criticises the introduction of the tax on dividends, which they say amounts to a double taxation of profits. The new duty would apply only to Slovak owners of companies and leave foreign owners unaffected.

Tax experts point out that while before the tax changes businesses were burdened by the 22 percent corporate tax, but after cutting it to 21 percent and simultaneously introducing a 7-percent tax on dividends, their tax burden would actually increase to 26.5 percent.

As promised the government is reducing the corporate income tax, from 22 percent to 21 percent as of 2017. This would reduce budgetary revenues from this tax by €130 million annually.

“The aim of the change is to improve the business environment and increase motivation of entrepreneurs to pay taxes,” explained the Finance Ministry.

The government has been promising to slash this tax for some time, but even the new rate is well above what it once was: 19 percent introduced as a flat tax in 2004. The first Fico government increased it from 19 percent to 23 percent but within one year it decreased to 22 percent. The cut was compensated with the introduction of tax licences, which should be scrapped as of 2018.

The 21-percent rate will still remain one of the highest in the region, Martin Vlachynský, analyst of the Institute for Economic and Social Studies (INESS) think tank, told the Sme daily.

Out of all tax changes the re-introduction of the tax on dividends caused the biggest uproar in the business sector. While originally the Finance Ministry proposed it at 15 percent, in the end it will be only 7 percent. The tax on dividends is not retroactive and will apply only to future dividends. Originally the companies which have not paid dividends from years 2004-2016 should have been obliged to pay the tax.

The tax on dividends should bring in €70 million to state coffers annually.

Under the adopted change, levies from dividends to health insurers, which currently amount to 14 percent, will be abolished.

Klub 500, the association of companies with more than 500 employees, welcomes mitigation of the original proposal of a tax on dividends, but nevertheless criticises the tax as this way the government is going to tax honest businesspeople who are leaving their profits in Slovakia.

“As much as 90 percent of dividends flow abroad,” Klub 500 Executive Director Tibor Gregor told the Hospodárske Noviny daily. “It is unjust that the government ignores these entrepreneurs and taxes those, who live here and spend their money in our country.”

The Finance Ministry responded to the criticism by saying that taxing dividends is completely standard in tax systems of the most developed countries of the world. It cited that out of 35 OECD countries as many as 33 have a tax rate on dividends at the same or higher rates as those proposed in Slovakia.

Nevertheless, tax experts point out that introduction of the new tax scraps the principle of single taxation in Slovakia, and they do not agree with the government’s argument.

“The main difference between Slovakia and other countries within Europe was that Slovakia’s tax system was based on the principle of single taxation,” Wilfried Serles, managing partner for Grant Thornton Slovensko, told The Slovak Spectator. “By introducing this tax the government throws out the principle of single taxation and lines Slovakia in the range of other European countries. And by doing so they lost one of their last main advantages in selling Slovakia to foreign investors.”

Serles believes that Slovakia does not need to introduce any new tax to bring more money into state coffers when the fight against tax fraud could bring much more in terms of revenues than the introduction of the tax on dividends.

“From our point of view, the introduction of this new tax is a wrong, political and economic, signal,” Serles said.

The government is also decreasing the tax burden on the self-employed. It was the second Fico government in 2012, which tightened conditions for the self-employed who do not want to keep accounting books, allowing them to deduct a flat-rate 40 percent of their expenses, but only up to €5,040 per year. Now, the Finance Ministry is increasing this rate to 60 percent while the cap increases to €20,000. The self-employed would pay their taxes according to new rules firstly in 2018, for the 2017 tax period. This change also means that the self-employed will also pay lower health and social insurance contributions.

Alica Orda Oravcová from the Slovak Chamber of Tax Advisors sees this as a positive change for the self-employed while this change would not only save money for them but also reduce red tape, she told Hospodárske Noviny.

The change may cost state coffers up to €40 million annually.

It will be the self-employed with annual incomes exceeding €1,000 who will profit from this change.

At present, about 170,000 out of total 283,000 self-employed use the flat-rate expenses scheme. The Finance Ministry has calculated that the change would affect about 58,000 self-employed people, who would save on average €410 annually.

The cabinet also adopted an increase and extension of the special tax paid by businesses in regulated industries – like companies active in energy, insurance, public health insurance, telecommunications, postal services or the aviation sector. The levy was to be temporary and end in 2016 but the Finance Ministry proposed to prolong it and double the rate from 0.00363 percent to 0.00726 percent. But based on the approved change, the rate should gradually decrease; firstly from 2019 and secondly from 2021.

The new legislation also changes the scheme for calculation of the tax. While originally only companies that generate at least 50 percent of their revenues in a regulated area were obliged to pay the special tax, now the companies should pay the tax exclusively from their revenues in a regulated area. Simultaneously only companies with profits of €3 million at least would be obliged to pay this tax.

“We are speaking about large companies, which indeed have space for crying, but on the other hand they have a naturally unique position on the market and issue invoices for network services every month,” said Kažimír. “The subsequent results are good margins and big bucketloads of money, which go out of our country.”

Companies ponder taking the changed levy to court arguing that the tax was originally planned as a temporary duty.

Among measures labelled as non-systematic is also the 8-percent levy to be paid by insurance companies on non-life insurance. Insurers have paid so far such a levy only from liability car insurance policies.

The Finance Ministry estimates that the levy would fetch it €55 million while this money should be divided amongst ministries of interior, health and environment.

Insurance companies have calculated that they will have to increase prices of non-life insurance policies by 12 percent to cover the new duty.