The state coffers should be filled with more money this year, due to a change in estimates of revenues stemming from the collection of taxes and levies. Several ministries have already shown interest in getting increased resources from the budget. 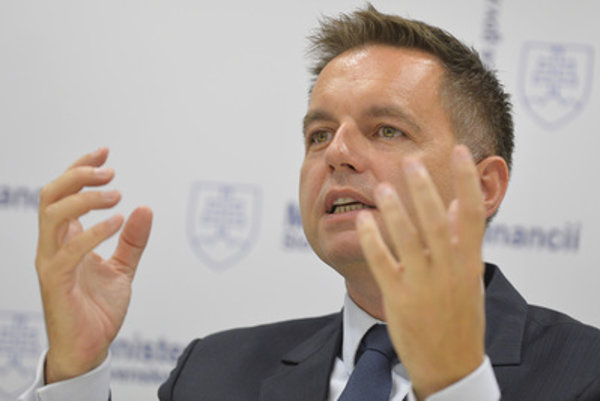 The new estimate predicts an increase of €397 million or 0.49 percent of GDP when compared to the previous prognosis from June, according to the Financial Policy Institute (IFP), which comes under the remit of the Finance Ministry.

The biggest share (three fifths) of the increase is in tax collection of income tax from legal entities, thanks to a growth in profitability. Collection of the value added tax (VAT) improved as well.

Analysts have increased the estimates of tax and levy collection in the following years as well – by €558 million in 2017, by €649 million in 2018 and by €595 million in 2019. They have already counted on the legislative changes made by the cabinet in August and September.

“The amendments to the legislation have increased the tax revenues between 2017 and 2019 by 0.1-0.2 percent of GDP in total,” analysts say, as quoted by the TASR newswire on September 30. Additional revenues in 2017 should be facilitated by increased levies from regulated sectors in the amount of €91 million and increased rates of tobacco products that should generate a further €30 million.

The public administration budget for 2017-19 – expected to be approved by the cabinet in the upcoming days – meets the objective of a balanced management of public finances stemming from the Government Manifesto, Finance Minister Peter Kažimír said on RTVS’ political discussion show Sobotné dialógy / Saturday Dialogues on October 1.

Slovakia’s public deficit should reach some 2 percent of gross domestic product (GDP) this year, with the outlook of budget finally reaching a surplus of almost 0.2 percent in 2019, the minister stated, adding that none of the budgets has recorded such a result since the creation of Slovakia. The positive prognosis is linked to the expectation of better tax collection and economic development.

Reducing burdens of the self-employed, as well as the fact that taxes are being levied more efficiently, are welcomed also by the opposition MP Eugen Jurzyca (Freedom and Solidarity-SaS) who was also present on the political show. However, he does not like the fact that the cabinet is raising taxes in certain areas. Taxes should be collected from everyone, in an honest way, but at lower tax rates, according to Jurzyca.

On the same TV show, Kažimír added that it is now time to increase the salaries of public sector employees working outside of education and that negotiations with them have already begun. The finance minister noted that teachers’ salaries increased by total of 24 percent in the previous electoral term. Moreover, the current cabinet has committed itself to 6 percent hikes in teachers’ salaries every year.

The government has managed to collect more money to the state coffers than originally expected – almost €700 million – and thus, ministries are already requesting money from it, the Pravda daily wrote on October 1. Totally, they have asked for about €2 billion more. This year, the government has already allocated €32 million to the 6-percent increase of teachers’ salaries. Next year, part of the money collected will go to increased pensions – €8.2 a month. Also, taxes for the self-employed who deduct flat expenses from their base to calculate taxes from will go down. Corporate tax will fall from 22 to 21 percent.

Still more money is expected to come to the budget (e.g. from growing tax for gambling, tobacco or dividends), Pravda wrote. Thus education, transport, environment and foreign ministries are asking for increased financial support. No official response of the cabinet has yet been published.