Košice Marathon without time record but with record participation

The oldest marathon in Europe was won by Kenyan Kiyneg; although no time record was broken, there was record participation. 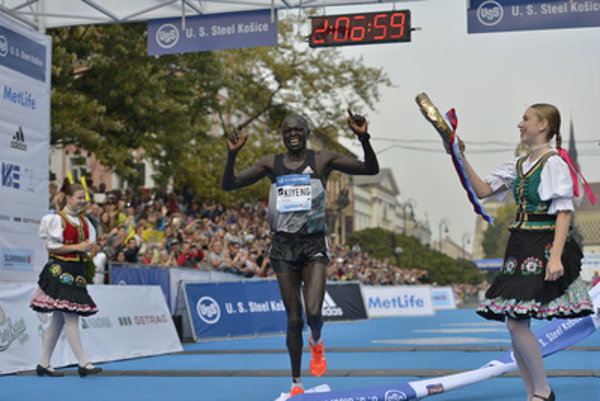 In the 93rd year of the event, 11,713 runners competed. It took them almost three minutes to complete the start. In total, around 60,000 people were in the streets of Košice on that day, according to the Sme daily.

Kiyeng, aged 33, was among the favourites but not really expected to win. His winning time is the 17th best in the history of the marathon. It feels excellent, he said for the Slovak RTVS channel, adding that he was satisfied with his time and with the fact that he fulfilled his plan: he wanted to leave rivals behind on the 30th kilometre and he succeeded "although we were all very strong, those best in the lead."

Tadesse Temechachu of Ethiopia ended second (2:10:15); the best Slovak being Jozef Urban in eighth (2:22:16). "It was a bit warm; but what I minded more was the fact that I had to run the second part alone, we could not draw each other into a group,” he said, as quoted by Sme. “I was slightly surprised by my personal record, but when I found out at the 35th kilometre that this will be my best time, I put everything into the finish.”

Among women, Ethiopian Chaltu Wako dominated, with a time of 2:32:19 h; the main favourite, Kenyan Emily Ngetich ended second (2:33:56), while the record from 2013 also remained effective. The best Slovak woman was Zuzana Korotvičková in fourth place (02:58:28).

At the start it was a comfortable 14 degrees Celsius, but gradually the temperature rose to 20°C – which is too much, even for the African runners. The high humidity did not help, either. Thus, the record time from 2012 remained unchallenged.

The Košice Marathon 2016 had a record participation not just in the number of runners but also in number of countries: 58.