Matečná: The uniqueness of cabbage from Záhorie is worth preserving 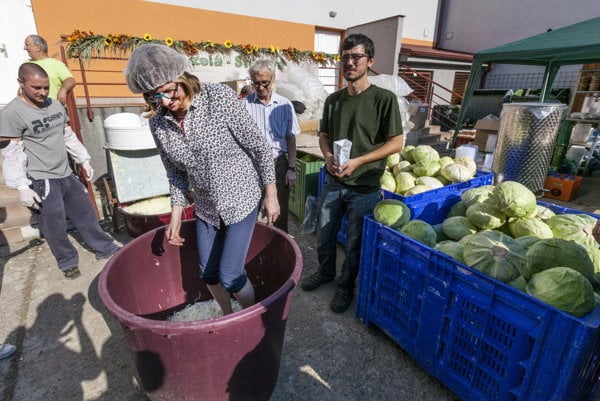 Cabbage production in Slovakia has been falling since 2002, with a drop of almost 40 percent year-on-year; however, sauerkraut production is growing, as it recorded a y-o-y increase of 1,920 tonnes, stated Agriculture and Rural Development Minister Gabriela Matečná on October 1 when speaking at the opening of the 20th annual Dni Zelá (Cabbage Days) festival in the town of Stupava (Bratislava Region) in the region of Záhorie.

The production of white cabbage currently makes up some 5 percent of the total vegetable production in Slovakia. However, the number of Slovak producers growing traditional cabbage varieties, which used to be grown mainly in the region of Záhorie, is decreasing.

These varieties are being replaced by non-Slovak species with higher rates of yield, such as Oklahoma, Gintana, Septima or Transan.

“The uniqueness of cabbage from Záhorie is worth preserving and only customers can do it,” said Matečná as cited by the TASR newswire, adding that customers should ask their sellers about the origin of their products.

Conversely, sauerkraut production increased by 28 percent y-o-y to 8,900 tonnes in 2015. It is probably connected with the positive health effects of sauerkraut. Among other things, it contains a lot of vitamin C, beta carotene, vitamins K and E, B9, calcium, fibre and antioxidants.

“The quality will never be replaced by quantity,” said the minister. “Fresh and quality local food is irreplaceable.”

Sauerkraut from the Stupava area is a unique speciality. Cabbage has been grown and processed by fermentation in this area for centuries.