Migration: a joint challenge, a waste of money or an example of needing to value the outcome – these are the Slovak responses to the Hungarian referendum on refugee quotas. 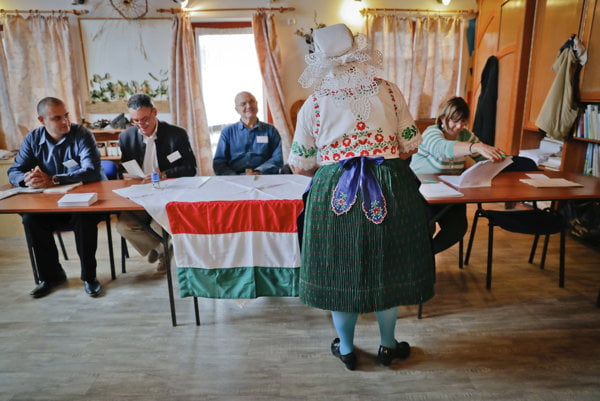 A picture from the village of Veresegyhaz, Hungary. (Source: AP/TASR)
Font size:A-|A+

Hungary held a plebiscite on October 2 asking "Do you want the European Union to be able to mandate the obligatory resettlement of non-Hungarian citizens into Hungary even without the approval of the National Assembly?"

"Regardless of the outcome of the Hungarian referendum, we need to realise that the migration issue is actually a joint challenge for the entire EU and all its member states must bear their portion of responsibility in seeking the right answers and solutions to this crisis," Slovak Foreign Affairs Minister Miroslav Lajčák said in response.

The Hungarian referendum was pronounced invalid due to insufficient turnout. The stance of the Hungarian government, which rejects the quotas, was supported by 98.3 percent, or more than 3.25 million voters, although the turnout equalled only 43.9 percent – and later even dropped to 40.1 percent after almost four percent of votes were written off as invalid, the TASR newswire reported.

“I think that the turnout [in the Hungarian referendum] is an unambiguous answer, as many people did not come to the referendum at all,” said German Foreign Minister Frank-Walter Steinmeier, who is currently paying a visit to Slovakia, as quoted by TASR. “Now it is up to the Hungarian government to find the right solution.”

The member states should listen to each other, Steinmaier opines.

“Naturally, on one hand there is fear and criticism on the part of individual EU member states, but on the other hand there is a need to realise that migration is not the problem of a sole country, it concerns all of us,” said the German minister, as quoted by TASR, adding that the countries should try to find common European solutions together.

A waste of money

The referendum has proven to be an ineffective method for central European democracies, as tens of millions of euros can be put to more effective use, Andrej Danko, chair of the Slovak National Party (SNS) and speaker of the Slovak parliament, commented.

“Although it’s necessary to perceive the prevailing mood of people, there’s no need to push it politically,” Danko added, as quoted by TASR. “However, even though the turnout wasn’t high, the message of the referendum is clear: people in these parts don’t subscribe to automatic sheltering of migrants.”

If a similar plebiscite were to take place in Slovakia, it would be a waste of money, he added.

MEP Richard Sulík, chair of the opposition Freedom and Solidarity (SaS), also commented on the plebiscite, saying that the result should not be underestimated.

Although only 40 percent of the votes were valid, almost all of them were against the quotas, he added.

“Even among those who didn’t come to the polling stations or those who submitted an invalid ballot paper, a lot of people certainly share the same view on it,” said Sulík, as quoted by TASR.

The SaS leader sees the reason for the weak turnout as bad timing.

“If the referendum had been held shortly after a [EU’s] proposal concerning a €250,000 fine for each rejected migrant, more than half of eligible voters would have come [for the referendum]," Sulík said, as quoted by TASR.

Moreover, Hungarian Prime Minister Viktor Orbán did not try to convince people about his view only in his home country but also in the EU and thus fragmented his forces, Sulík added.

He is also convinced that quotas as a tool for fighting the migrant crisis are dead in the EU. Hungarians, therefore, did not have a reason to come to the referendum.

“The quotas would certainly be rejected in Slovakia, but it’s just as questionable as in Hungary whether a sufficient number of voters would came to a referendum,” Sulík said, as quoted by TASR, adding that much would depend on how a referendum would be presented and carried out in Slovakia. “The idea of quotas and fines wasn’t at all received with applause in Slovakia in the summer.”