Since the beginning of September, citizens of Bardejov have had the opportunity to pick herbs for free. 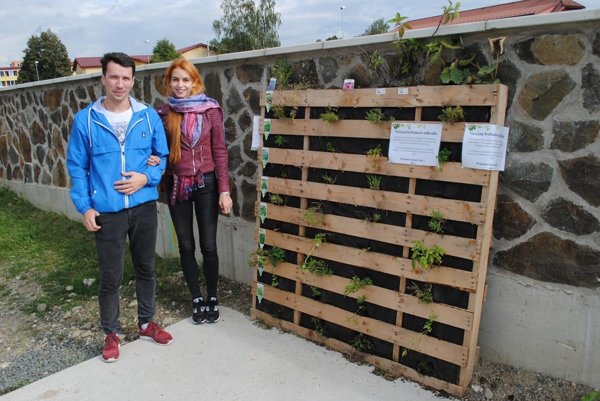 Two young people came up with the idea of a public herbal garden near the river Topľa.

“I am from Bardejov and grew up near here, in the part of town called Vinbarg. We have never had a garden. I had an idea – near Topľa is a huge fence to protect us from the river. The fence seems so cold, but we can decorate it! So I thought it would be nice to change the fence to a vertical garden,” said Barbora Hečková, a university graduate of management.

Hečková, with her boyfriend Matej Gimera, came back to Bardejov after studying in Bratislava. They wanted to do something for the people in the town and the community gardens project in Bratislava inspired them.

“Our aim was also to inspire others, to do something altruistic for the citizens of Bardejov,” explained Gimera.

Even though the herbal garden has exists only for three weeks, Hečková and Gimera want to continue in the spring.

“We were curious if the garden could survive at least one weekend. It worked and people started to use our garden quite often. We are really happy about it. If we have a chance, in a few months we will continue enlarging our garden,“ adds Barbora.

Along with traditional herbs such as mint, chives, parsley, basil, thyme, and rosemary, there are also special herbs like sage and echinacea.

In every line of herbs in the palette is the name of the herb with pictures and an QR code, a matrix barcode that people can use with their phones to find additional information. The whole herbal garden cost less than 50 euros.