Slovakia is also part of the international projects to commemorate Nazi victims. 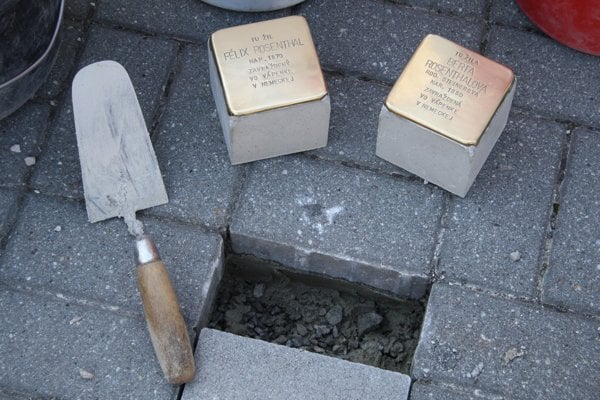 The stones are hard to spot in pavement. (Source: TASR)
Font size:A-|A+

“TOMÁŠ Rosenberg, born in 1923, lived here. He was detained as a partisan near Brezno, and executed on December 12, 1944 in Brezno-Krtičná.”

This is the inscription on one of more than 90 commemorative plaques on special cobblestones placed in Slovakia, which commemorate the victims of the Nazi regime. The Stolpersteine project, which started in Germany, was brought to Slovakia in 2012.

“We liked the idea of certain informality, discreetness and intimacy of the memories the stones provide,” Jakub Lunter from civic association Antikomplex, which coordinates the project in Slovakia, told The Slovak Spectator.

These “stumbling stones or blocks” (as the original name is translated) do not compete with other memorials, plaques or busts placed in the public spaces.

“With their size [about 10x10 cm] and placement they are unobtrusive, seen only by those who can see them or come across them by chance,” Lunter said.

The project was developed by German artist Gunter Demnig who remembers the victims of the Nazi regime by installing commemorative brass plaques in the pavement in front of their last address of choice, the official website of the project reads.