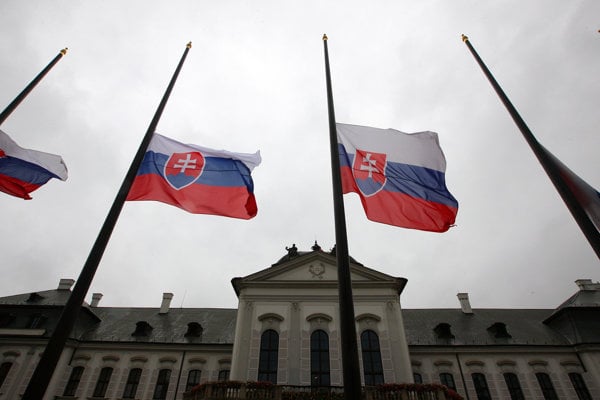 Flags in front of the Presidential Palace in Bratislava fly at half-mast today to pay tribute to the late President Michal Kováč. (Source: Courtesy of the Office of the President)
Font size:A-|A+26

State flags will be flown at half-mast and all casinos will be closed in order to honour and commemorate the late president Michal Kováč.

“He was our first Slovak president and that is the way we need to treat him,” said Prime Minster Robert Fico, as quoted by the TASR newswire.

The state funeral of Kováč will take place on October 13. People will be allowed to pay their respects to Kováč at the Bratislava Castle a day before, on October 12, TASR reported.

The first part of the state funeral will be held at the Bratislava Castle, from where the mourning procession will move along with the casket to the Presidential Palace. A Requiem Mass for the late president will be held at St. Martin’s Cathedral, with family members due to pay their last respects at a private ceremony at the Ondrejský Cintorín cemetery in Bratislava.

The funeral is being organised by a state committee approved by the government, along with members of Kováč’s family.

The funeral should be a dignified farewell to the life of such an important figure, according to prime minister.

On the same day there will be a state day of mourning from 8:00 to 17:00. It means that state flags will be flown at half-mast and all casinos will be closed.

This will be the eighth state day of mourning in Slovak history.