It may be the fate of sculptors focusing on monumental works that their exhibitions are not too frequent – but in the case of renowned Slovak artist Jozef Jankovič, there may be more behind it. 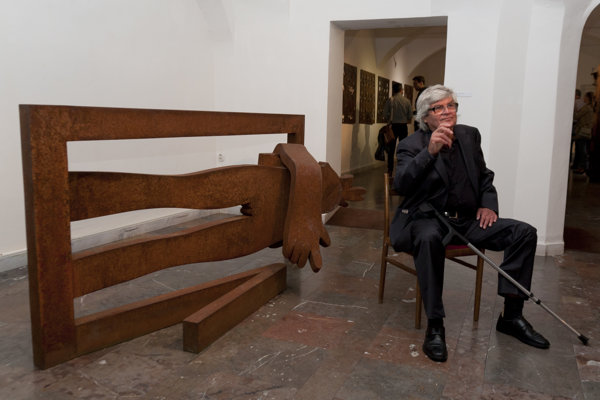 Although his work was forcibly interrupted for 20 years under the pressure of the communist regime, even his post-1989 exhibitions have not been very numerous and frequent.

For example, his current exhibition Plynutie času /Flow of Time in the Bratislava City Gallery (GMB) comes after a break of 27 years. On the other hand, it is a truly vast overview of his life-long creative process. The oldest works (City, Untitled) date back to 1960, while the latest ones (Nostalgia, Last Conversation) are from this year

Jankovič’s expressive, impressive and even disquieting works fill the second floor of the Mirbach Palace, the ground floor, and they even spill over into the inner yard where they are company for the fountain. The statues and objects on display are physically big, as well as imparting their great message – the artworks are deformed, overexposed, or bound in various forms of shackles, appealing to visitors and seemingly trying to break loose and enjoy freedom. Rather than joy, bright colours seem to plead for attention and interaction.

Jozef Jankovič (born 1937) graduated from a woodcarving course at secondary school and studied sculpting at the Academy of Fine Arts (VŠVU) . Already in 1960s, he had won international acclaim, as well as several prizes, including the Grand Prix at the Danuvius biennial in Bratislava (1968) and the Herderov Prize in Vienna (1983). Later, he could not make his monumental sculptures for public space due to the social and political situation, and thus he turned to jewellery and graphic art, being one of the founders of computer graphics in Slovakia 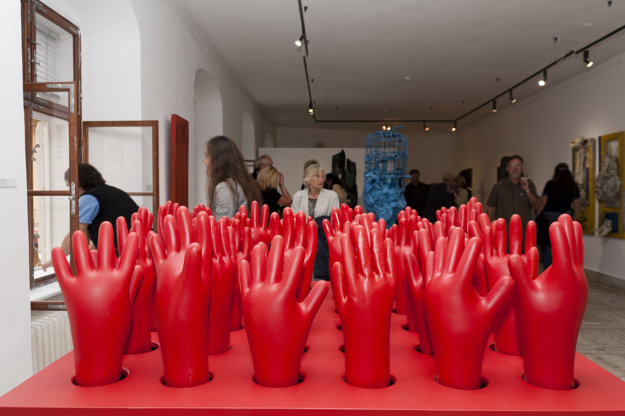 The situation changed after the fall of communism in 1989: from 1990, he was a professor, and the first post-1989 rector at the VŠVU. Many of his outsized figural reliefs and sculptures are – or were – located in public spaces.

Jankovič is the only Slovak sculptor represented in the open-air collection of contemporary art E.P.A.D. in the La Defénse borough of Paris. Together with another Slovak artist, Jana Želibská, he was part of The World Goes Pop exhibition in London’s Tate Modern Gallery, at the end of 2015.

The curators of Jankovič’s exhibition, Juraj Mojžiš and Ivan Jančár, have also authored an eponymous monograph to accompany it.

The exhibition can be seen daily, except for Mondays, until October 23, in the Mirbach Palace of the GMB.