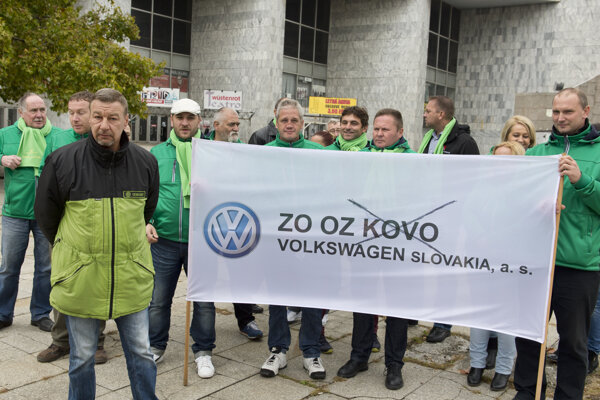 Unionists at the Slovak arm of the German carmaker Volkswagen Slovakia led by Zoroslav Smolinský have already founded a new trade union organisation to which members of the original OZ KOVO trade unions’ branch have started to switch. They did so in response to the decision of OZ KOVO  to scrap Volkswagen’s original trade union branch on October 10. Smolinský sees OZ KOVO’s ambition to take control over his organisation behind this, as well as efforts to gain possession of its assets.

Smolinský said that dozens of employees joined him at the front entrance to the Bratislava plant in a show of support. The new organisation was founded on September 18 due to persisting conflicts with OZ KOVO chairman, Emil Machyna. Workers can now unsubscribe from the original trade union branch and fill in an application for the new, modern Volkswagen trade union, he said.

The trade unions’ branch at Volkswagen is the largest in Slovakia, with 78 percent of the 11,000-strong workforce as members. Smolinský expects most of them to join the new organisation, which is open to cooperation with other organisations and companies but won’t actively approach them.

“Our priority is to protect our own employees,” said Smolinský.

Smolinský said that the company management called on the unionists to leave the premises of the plant and take a day off on Thursday. According to Smolinský, this was simply due to Machyna putting pressure on the management. However, the management later revised its decision.

“The management declared that it won’t intervene in the dispute between OZ KOVO and us,” said Smolinský.

A joint meeting of the representatives of the Volkswagen management and the old and new organisations is scheduled for October 17.

The assets of the original branch at Volkswagen amount to over €1 million, said its vice-chair Jolana Julkeová. A court will decide what will happen to these assets after the branch ceases to exist. The new trade union has appealed to the court in response to OZ KOVO’s actions.

Volkswagen unionists view the activities of the Machyna-led trade union as a culmination of years of effort to take control over trade union branches against the will of their members. Smolinský gained 4,401 votes in elections in May, while his rival supported by Machyna attracted a mere 492.

Smolinský’s trade union has allegedly violated these by excluding one of its members.

“Unfortunately, the committee decided not to respect them [the rules], so we had to act as we did. However, this doesn’t mean that we want to lead the branch towards its cessation; quite the opposite is true. We wanted to stabilise the situation and seek compromise solutions,” OZ KOVO vice-chair Monika Benedeková told TASR.