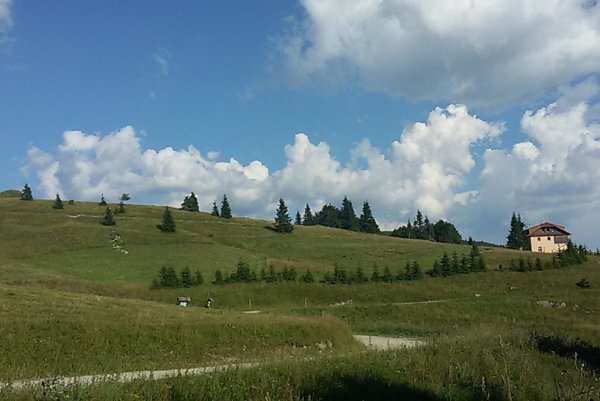 No bears this morning. They must have been on holiday.

I hate to be so repetitive but more f***ing trees. This walk seems to have gone out of its way to join the forested areas of Slovakia. Ok I am being unfair. The forests are well managed and deciduous so beautiful. And like snowflakes every tree is different.

Today definitely was a sloped day, if it wasn’t up it was down. With the ups, as previously mentioned dominating in reality. Only in a car, a boat or a plane is the world not an up place. It was hot again but that is less scary that the wet of yesterday. 17 days walking and we have only been rained on twice – we are not complaining, except about the heat, and the trees, and the lack of animals.  And oh about the …

No we are not complaining really. Not even us adults. It’s easy for the kids. They are young and fit. 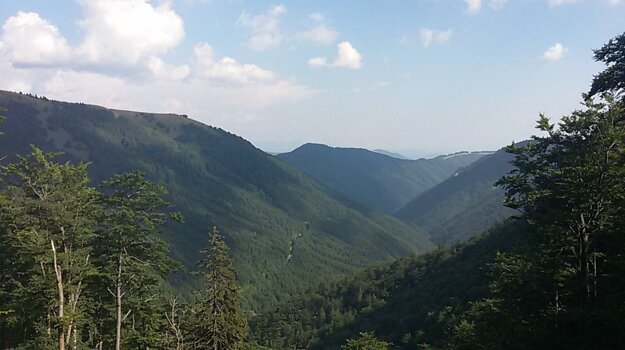 The forests around here are deep, we met a few people. One of who was a man hiking naked – he put underpants on when he saw us coming. So at least we have seen something bare. Later we met a lady picking blueberries – there were loads – she had seen a bear print that morning. We didn’t say we had seen a bare man. Not sure which is more scary (I do know it’s “scarier”- on balance we think that man was).

However, any though of ever complaining completely disappeared when we entered that valley of Kráľova Studňa, or Kráľova Hoľa as the wife kept calling it. We should get to Kráľova Hoľa in about a year and a week’s time, or in a few weeks due to magic, so it was confusing. Weather permitting.

This valley is without doubt, ok the weather was perfect, but without much doubt the most beautiful place on Earth if not in Slovakia. If you haven’t been there then you are really missing out. It is not something that you can photograph – it’s beauty is on a big wide all-encompassing scale. If I tried to describe it I would fail. You know how I write. But really, and I mean really: go.

The hotel, the only thing there, other than a ski lift, was great. They did our washing – so we can continue to smell nice. I think this is why people don’t believe what we are doing. We are clean. We don’t have the accumulated grime of days of walking and sleeping rough. We have clean clothes and smell of soap. So people – it can be done. At least to day 17.

The further East we go the less there is it seems. So the sections will get longer – but we have trained. 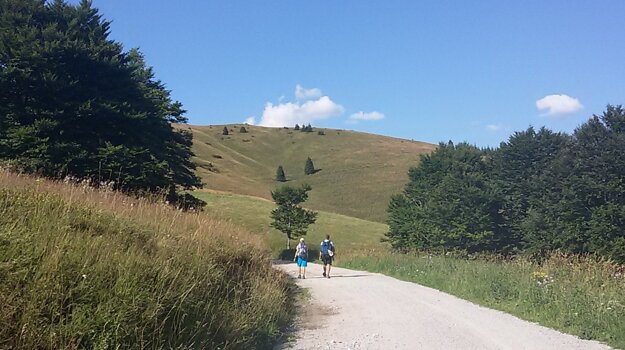 There was a group of Chi Kung (Life Energy Cultivation) practitioners at the hotel. Watching them in the morning was an eye opener. It looked like something that would be useful to all of us. Until they started washing themselves with the air that is. They lost me there.

General comment:
Got to the most beautiful valley I have ever seen.
The 5 highest mountains in Slovakia – 13,153 meters and only Day 17.