Kiska in conflict with other V4 presidents

Slovak President Andrej Kiska was in opposition with the rest of the presidents of the Visegrad Group (V4) countries – Poland, Hungary and the Czech Republic – concerning the refugee crisis. 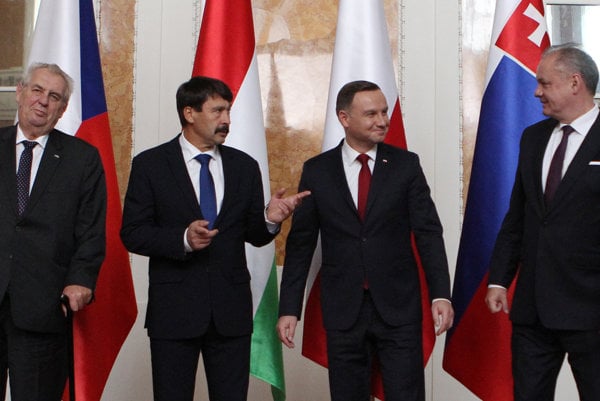 At the recent meeting of presidents of the V4 countries in Rzeszów, Poland, Kiska expressed an opinion which completely differed from the views of his counterparts.

The V4 has never had such a bad image than today, Kiska said on October 14 at a second meeting of the Visegrad Group presidents. Next time, they are supposed to meet in Hungary.

Immediately after the end of their meeting the Slovak president flew home, without attending the planned lunch with his counterparts, the Pravda daily wrote on October 17.

Political analyst Michal Horský considers such behaviour unfortunate, especially regarding the fact that the president actually cannot change the foreign policy of Slovakia, which is in power of the prime minister and the foreign minister. Though he courageously faced his counterparts, his attitude did not resonate abroad or even earn him points on the domestic political scene, Horský opined for the daily.

In Rzeszów, Kiska called on his three counterparts “as presidents to jointly influence all top politicians not to use V4 as a shield for their domestic purposes”. He surmised that if the Ukraine conflict further escalated and one or two million refugees suddenly came to the Visegrad countries, they would also appeal to other EU members for help and solidarity.

Political analyst Ján Baránek doesn't consider Kiska’s Polish mission very successful, either. "The Visegrad Group is currently on the top of being influential and respected; it has had the biggest impact within the EU since its establishment,” he noted. He added that the Slovak president, although known for his rather “pro-Brussels” views, should have expressed his disagreement with the refugee policy of the Union on some different occasion, and not bring conflict into the V4 – as all prime ministers of these states have tackled this issue almost in perfect agreement.

Czech President Miloš Zeman objected to Kiska’s statements, recommending the Slovak counterpart to “not use the group as a shield for political purposes” and adding that he perceives “the V4 as wiser than the rest of the EU” in connection with the refugee crisis.

Polish President Andrzej Duda said that refugees are seeking countries which offer them generous social programmes and well-paid jobs and avoiding and fleeing countries like Poland.

“In fact, we are not fighting for freedom anymore, the security of the V4 and EU as a new issue is the focus”, Hungarian President János Áder warned.

However, the V4 presidents agreed on the other issues discussed, according to Pravda, like energy security and the gas market in central and eastern Europe, which needs diversification rather than relying only on Russian gas.