Sagan came from behind in the last sprint to earn a first-place finish, again demonstrating his dominance in cycling. 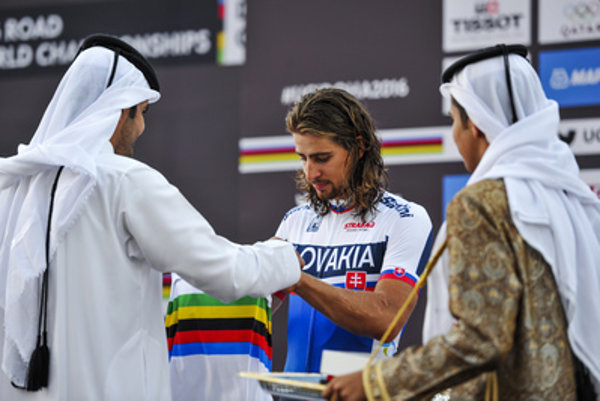 Sagan defended his world championship in road cycling on the 257.3 kilometre track in Qatar, in temperatures close to 40 degrees Celsius. Before the race, he was very careful in his comments; besides high temperatures, there was also a strong wind which could influence the outcome. Moreover, another disadvantage was that Sagan had only two fellow countrymen in the peloton.

One of the Slovaks, however, Michael Kolář, was the athlete who helped him win and stayed with him until the finish line. Final photos show these two men hugging. He kept looking out for cyclists who might threaten Sagan and blocked them by going to the front and setting a pace that helped sort out the peloton and make everyone sprint. “And Peter is crazy, he rounded this up fantastically,” Kolář summed up for Sme. He ended up nineteenth, giving up the fight for a medal position.

Sagan said after the race that he believes in fate, and that he had good luck. “It is unbelievable, I am surprised myself what I managed to do,” he told a press conference, joking that the whole world was rejoicing again.