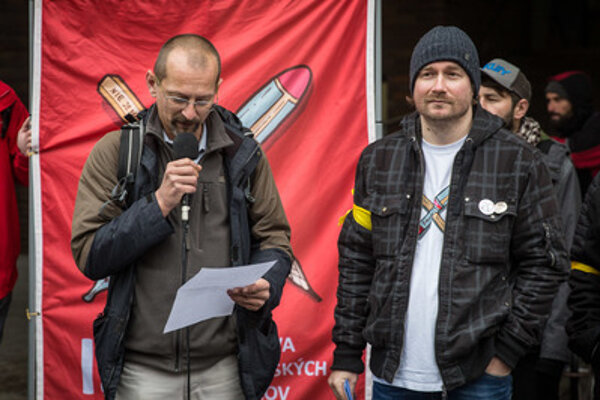 L-R: Head of ISU Branislav Kočan and vice-president of the Slovak Chamber of Teachers Vladimír Crmoman during the march on October 19, 2016. (Source: SITA)
Font size:A-|A+0

The ISU announced the halt of the strike on October 19, during a protest march called The March of Responsibility. Around 70 teachers gathered for the march whose route lay between the headquarters of the Education Ministry and the Finance Ministry. The teachers wanted to point to under-financing of the Slovak education sector.

“We’re positive that the graded strike has met its purpose but we see no scope for continuing it in the current situation,” Vladimír Crmoman of the ISU said, as quoted by the TASR newswire. “Therefore, the ISU’s strike committee decided to end the strike as of October 19.”

Originally, teachers declared the gradual strike would continue until October 25 when four lessons would have been dropped at some schools.

The ISU believes that it’s now up to the Education and Science Employees Trade Union Association (OZPSaV) to take over the initiative and insist on the demands included in a declaration signed by school organisations in February. These requirements include a demand for an increase in teachers’ salaries of 25 percent as of January 1, 2017 and by 10 percent annually in following years. In addition, the budgets of the ministries of education and interior should be increased by €400 million in order to make it possible to eliminate inequality in terms of the equipment available to individual schools.

“We’re still ready to support any action taken by OZPSaV and to head towards improving the situation in the Slovak education sector,” added Branislav Kočan of the ISU.

The graded strike began on September 13 and according to the ISU it has been joined by around 2,500 teachers, although the number of teachers signing up has gradually fallen. However, the ISU sees the strike as a success. “Thanks to the gradual strike we managed to bring all the problems to light, and a discussion on them is under way,” Crmoman summed up. However, teachers will be only able to assess the overall success after over a longer time; but without their activities, there would be no tension in society, the ISU representatives claimed, as cited by the SITA newswire. Kočan added that the dwindling number of teachers participating – who allegedly perceive the strike as too little effective – was one of the reasons to end the strike.

The Education Ministry issued a statement claiming that minister Peter Plavčan has fulfilled his promise and negotiated  for the education sector a budget higher in €206 million, SITA wrote.