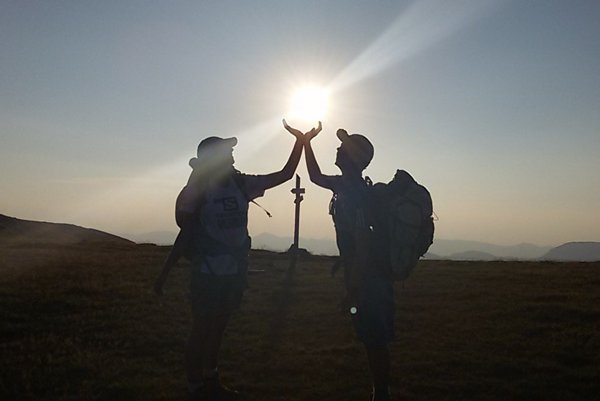 It is walking a vertical mile (read the bit at the bottom). Isn’t it. Why are you laughing?

We had a guest for the next two days, we had promised his mother not to kill him and she had laughed, we could try she said. Her thoughts two young kids carrying rucksacks a man who have no problem. Unfortunately, the kids had been training for the past 18 days. We offered to share his load between the four of us, but…

It was the second longest day so far, it was hot and a vertical mile climbing. We enjoyed it and I think once finished he did too. It’s that head banging thing – good when it stops.

We crossed a mountain bike race. I am glad we were just walking. These guys were amazing and willing to say hello even if they were desperately struggling for breath. We met them at the top.

It was just up, and gruelingly so. No sensible place to stop. But when you come out of the forest and onto the ridge proper. Paradise.

We took our time and we were thankful. We got to see the sunset from the top of the ridge. The light was perfect, the view spectacular, all we lacked, for your benefit, is a photographer. All the photos were taken on mobiles – we apologise but cameras are heavy. But it was big beautiful – Really Big.

The cottage was high on the mountain just under the ridge. It was basic, the food filling and carbo-loaded and the beer great. The water and shower were a mountain spring a couple of minutes’ walk through the bracken (we learned the difference (it’s not that exciting. But a fern has just one big leave where in bracken the leaf stem divides and has ‘branches’. Thanks dad.) between fern and bracken last year).

We were now carrying sleeping bags – kindly brought by our friend – the cottage doesn’t provide bedding. They do in an emergency – but we weren’t so lazy to class ourselves as an emergency so we carried sleeping bags for the last two days. The sleeping arrangements were friendly. Everyone on mattresses on the floor upstairs. They turn no-one away. Luckily there weren’t so many no-ones and we had space. But you can end up playing sardines. But it’s worth it. Even with my snoring.