RTVS head, Mika, refuses outside meddling with the news’ contents

Head of public Radio and Television Slovakia-RTVS, Václav Mika, reacted to accusation by coalition politician by suspending the head of news service, Lukáš Diko and by arranging a special committee to investigate the independence of the news-cast, the Sme daily wrote. 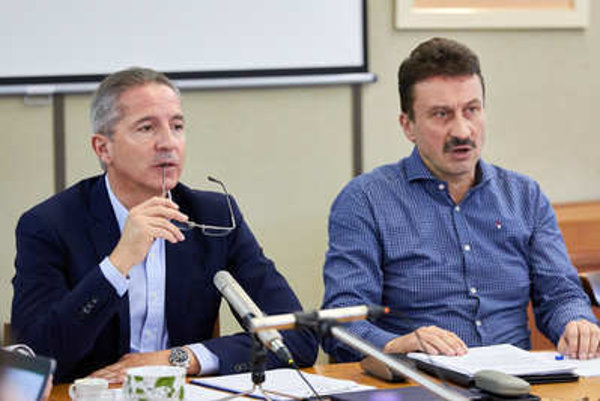 Parliamentary Defence and Security Committee chairman, Anton Hrnko, (Slovak National Party/SNS) has written an open letter to Mika, expressing his intention to initiate an extraordinary session of the parliamentary committee for supervising the activities of the Slovak Intelligence Service (SIS), during which he wants to question its head – Gábor Grendel (opposition OĽaNO-NOVA), the TASR newswire wrote.

This is due to private text-messages and email communications between certain journalists and Grendel that were recently leaked online by businessman Marián Kočner.

Hrnko claims that he does not know whether this communication is authentic; if it is, however, he sees it as a problem. He also stated for TASR that his actions in this matter are based on a call by his voters.

The SNS MP mentioned, for example, the communication between Grendel and Diko bargaining about what should be broadcast in a particular news story. According Hrnko, Grendel is abusing information of an intimate nature to influence certain journalists and they are subsequently acting according to his instructions. Hrnko is convinced that such a person cannot hold the post of the head of the parliamentary committee for supervising SIS activities. “Such a person represents a security risk for Slovakia,” said Hrnko, referring to Grendel.

In his open letter, Hrnko calls on RTVS to properly investigate all circumstances concerning the case.

Responses of those accused

In response, Grendel told TASR that he respects the right of each politician to advertise the apparent new spokesman to the Prime Minister Robert Fico, Interior Minister Robert Kaliňák and entrepreneur Ladislav Bašternák – the businessman Marián Kočner. “However, I won’t do that,” said Grendel, adding that if a sufficient number of MPs suggest convening a committee session, the session will be convened in line with the parliamentary Rules of Procedure. “I won’t comment on the content (of the communication) in advance,” he added on October 21.

RTVS in its response stated that it rejects such an illegal and purposeful activity that raises suspicion that RTVS has committed a crime. Apart from Diko, three other RTVS employees may be involved.

Cooperation with the general prosecutor, founding an independent committee and the suspension of the news department head have been the steps taken by RTVS’ so far, Mika said, as quoted by Sme. „My task is to resolutely stand against any efforts to damage the integrity of RTVS and the efforts to interfere with the personal integrity of the RTVS staff,” he added.

“Recently, I perceive political efforts to gain control over RTVS in a ridiculous way that was usual maybe ten years ago,” former chair of RTVS Council and mayor of the town of Hlohovec, Miroslav Kollár, summed up the activities of the coalition partner, the SNS.

At its extraordinary session on October 26, the RTVS Council decided on the special committee. The committee is a temporary body, which will report the results of its investigation to the head and Council of RTVS, and then be dissolved, TASR wrote.

Chair of the RTVS Council Igor Gallo presented the position of Diko, who in a letter refused the truthfulness of the publicised information, deeming the whole issue a purposeful discrediting and manipulative scheme against him and the RTVS news team. He summed the case up as a fight for the independence of RTVS and especially its news-cast. Diko said it was him who decided to take time off during the investigation, TASR wrote.