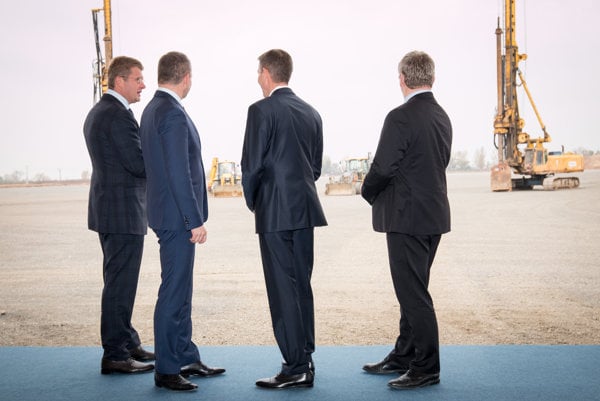 Representatives of the Slovak cabinet and the investor watching the building site of teh new logistics centre of Volkswagen Slovakia. (Source: SITA)
Font size:A-|A+4

Volkswagen Slovakia and Volkswagen Group Real Estate Slovakia laid the foundation stone for a new logistics centre adjacent to the Volkswagen car plant in Bratislava on October 27. The ceremony launching the construction of one of the largest and most modern logistics centres in Slovakia was attended by the Vice-premier for Investments and Informatisation Peter Pellegrini and Economy Minister Peter Žiga.

“The automotive industry is the backbone of the Slovak economy and one of its pillars along with the electronics industry," said Pellegrini, as cited by the TASR newswire. “I believe that Slovakia remains one of the most attractive localities in Europe for doing business. It also pleases me that such a company as Volkswagen perceives us in this way.”

The Slovak arm of the German carmaker will invest €150 million in the new logistics centre and will install some of the latest technologies including automatic collators with a capacity of 200,000 files for small assembly parts. Fully automatic collators will be able to serve 1,360 files per hour. Part of the logistics centre will be reserved for storing high-voltage batteries for the electric car model the Volkswagen Up! and hybrid vehicles.

The logistics centre should begin operating at the end of 2017.

VW Slovakia has spent about €1.5 billion between 2012 and 2016 and continues to invest in Slovakia, installing production technologies into a new body shop and building a new assembly hall.

The carmaker with more than 10,800 employees is one of the biggest employers in the country. It has produced more than 4.5 million cars since 1991 when it set up its factory in Bratislava.