Environment Ministry expects works to insulate the dump will start next year. 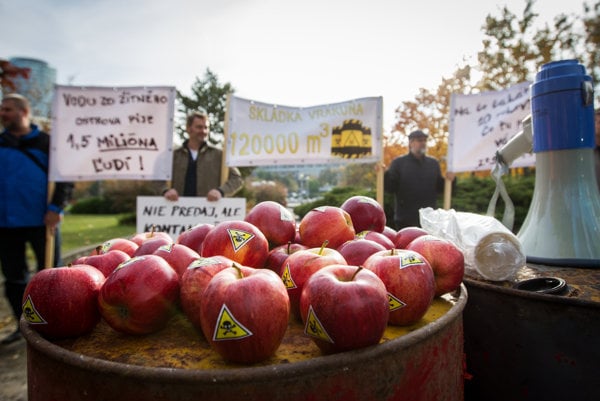 Even 27 years after the fall of the communist regime, the citizens of the Bratislava borough of Vrakuňa have yet to see their biggest environmental burden from that period – an old, leaking chemical waste dump – solved. To draw attention to the problem, which they do not consider to be merely local, as the leaking toxins threaten a major source of drinking water, they gathered at a protest rally in front of the government building in Bratislava on October 26. In response, the Environment Ministry assured Vrakuňa’s citizens that the matter is being treated as a high priority and that work to insulate the dump will start next year.

“The dump in Vrakuňa is not an ordinary illegal waste dump on which somebody threw some plastic bottles,” said Vrakuňa Mayor Martin Kuruc. “Dangerous chemicals are contaminating underground water and each day are progressing further towards Žitný Ostrov.”

Žitný Ostrov (Rye Island) is an area of national importance, as it is the biggest reservoir of drinking water in central Europe, with the capacity to supply as many as 15 million people, according to estimates by experts.

Kuruc warns that if chemicals get into the natural reservoir under the river island, which is formed by the Danube, Little Danube and Váh rivers, that would threaten an even bigger ecological disaster than an incident in the 1970s when oil leaking from the nearby Slovnaft refinery destroyed a source of drinking water in nearby Podunajské Biskupice.

The Environment Ministry says that until now the state’s hands have been tied as legal responsibility for the dump had not been clarified. But a recent ruling means a solution now appears to be closer.

“Now, the moment when the state can take it over is coming,” said Environment Minister László Sólymos when he met with the protesters.

A major problem in resolving harmful legacies from the communist era like the toxic waste dump in Vrakuňa is that the state first has to identify the so-called obligatory person, i.e. the institution or organisation that is responsible for the dump. If no concrete obligatory person is found, the state is left with responsibility for dealing with the problem.

But the procedure to find the obligatory person in case of the Vrakuňa dump is taking longer than originally expected. The previous environment minister, Peter Žiga, suggested last summer that action would be taken quickly, but this did not happen.

“They were promising as early as last year that in January we would go for a public procurement [for the project to insulate the waste dump],” said Kuruc. “It’s the end of October and nothing is happening.”

Sólymos, the new minister, is now also promising fast action. After the District Office of Bratislava, part of the local state administration, on October 11 issued a verdict that it is not possible to identify the obligatory person, the Environment Ministry will prepare a proposal for the government to declare the ministry the obligatory person. Sólymos plans to submit that proposal to the government in mid November. After the government approves it, the ministry can start a public procurement procedure to find a contractor to insulate the waste dump.

“We have prepared the project in advance, so we do not need to wait [before launching] the public procurement process,” said Sólymos.

While the ministry is not able to influence how long the procurement process will last, it estimates that work will start during the second half of 2017.

While there are two possible solutions for the waste dump, the Environment Ministry prefers encapsulation. This approach involves building a wall around the waste dump, which covers about 4.65 hectares and holds about 120,000 cubic metres of toxic waste. The wall would be built to a depth of 20 metres, where there is an impermeable layer of subsoil. The site would also need to be covered to prevent rain water getting into it. The cost of encapsulation is estimated to be between €20 million and €25 million, for which the ministry plans to use EU funds. By comparison, the cost of completely removing the waste and cleaning up the site would be €120 million.

The citizens of Vrakuňa are sceptical about the promises made so far, and say they will wait see what action is taken.

“When the cabinet approves the proposal [to identify the Environment Ministry as the obligatory person], I will be very grateful and personally send a thank-you letter to the minister,” Kuruc said.

The Vrakuňa chemical dump, which began life as an official waste site, was used by the chemical company Chemické Závody Juraja Dimitrova (CHZJD). It was built, with permission, in part of a dried-up branch of the Little Danube river in 1966 and closed down in 1979. About some 120,000 cubic metres of chemical waste were dumped there. Later, it was covered with an inert material.

After the Velvet Revolution CHJZD was transformed into Istrochem and later privatised.

But the dump and the related land was transferred to a local agricultural cooperation and afterwards to municipal office as early as in the 1980s, according to Miroslav Dragun, director of the Institute for Development of Bratislava Region. In the process of these transfers it became unclear who was responsible for the toxic waste.

In August 2015, the Environment Ministry announced the results of an extensive geological investigation of the locality, based on which it concluded that the location of the waste dump represents an environmental as well as a health risk that requires remedial measures.

The report reads that sources of drinking water on Žitný Ostrov are not endangered and the problem is local, but it is still necessary to address the issue. The geological investigation confirmed long-standing suspicions of high concentrations of dangerous agents like pesticides, herbicides, benzenes and arsenic, and said these were gradually spreading.