Slovak reactions to the inking of CETA Trade Agreement

The European-Canadian CETA trade agreement was signed on October 30, at 14:00 in Brussels, with Slovak Prime Minister Robert Fico attending. 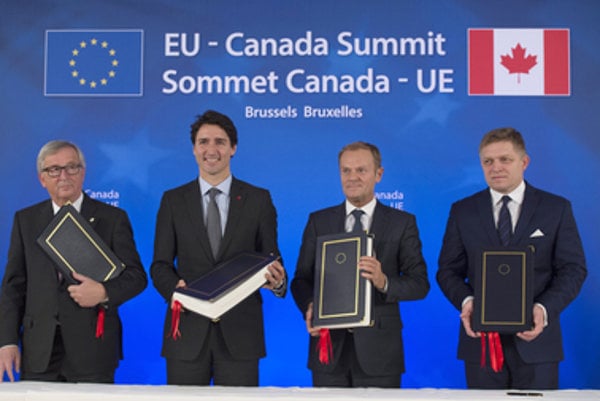 “Let’s be glad that such a progressive and good trade agreement, which can serve as an example for other countries in the world, has seen the light of day,” PM Robert Fico said after the conclusion of the EU-Canada summit. According to him, the mood of Sunday talks showed that the inking of CETA represents an enormous success, as the treaty is beneficial for both sides. He pointed out that the negotiation process which began in 2009 and during which Slovakia submitted its comments was marked by the negative stance of Belgian Wallonia region in its final stages, although there was no revisiting of the treaty’s fundamental text.

The Slovak PM also emphasised the Slovak presidency’s role in the process, as it convened with the extraordinary session of the EU Council for Economy in Luxembourg on October 18 at the initiative of minister Žiga where the consent for CETA was secured from 27 EU member states.

"This important free trade agreement…. will provide new opportunities not only for trade but also for investments and the creation of new jobs,” said Fico who praised Canada for being forthcoming to objections of individual European countries. He also pointed out that CETA still needs to be passed by the European Parliament and ratified by national parliaments of the EU member states. Until then, only those CETA clauses will be put in effect that fall under the remit of the EU.

The CETA free trade agreement will not have any profound benefit for Slovakia – although the situation must be viewed from a pan-European perspective, the Slovak Economy Minister said, as quoted by TASR. Žiga pointed out that the current amount of mutual trade between Slovakia and Canada is rather low, seeing as Canada ranks approximately 40th among Slovakia’s most important trade partners. He claimed that this free trade agreement with Canada will provide benefits to common people who might now buy goods from Canada free from 99 percent of the previous tariffs or customs duties.

Seventy percent of the overall Slovak-Canadian trade balance consists of cars, with other important commodities being mineral oils and aviation equipment, according to Prime Minister Robert Fico.

The free trade agreement was welcomed also by the vice-chair of the European Commission responsible for energy union, Maroš Šefčovič who deemed it – in a press release – another success for the Slovak Presidency of the Council of EU, after the informal summit and ratification of the Paris climate agreement.

CETA is so far the most ambitious agreement negotiated so far with a key G7 partner, and it can be an example for other trade talks between the EU and third parties. In practice, it will mean new opportunities for developing trade ties between the EU and Canada, as well as for Slovak enterprises.

The agreement will reduce customs of about 98 percent of all tariff items –which is the best result the EU has so far achieved in any negotiations about free trade agreements – since the first day of effectiveness. It will also remove the non-custom barriers for exports to the Canadian market, Šefčovič noted. Thus, CETA will bring new opportunities for European exporters of services, especially in key sectors like financial services, telecoms, energy and maritime services. However, CETA does not change the EU legislation in sensitive spheres, like e.g. hormones in meat, GMOs, etc., and it will not lead to lowering standards for consumers. Canada has also guaranteed the protection of 145 EU geographical designations which include, among others, the Slovak Tokaj brand.