The former industrial building is part of the panorama of Eurovea 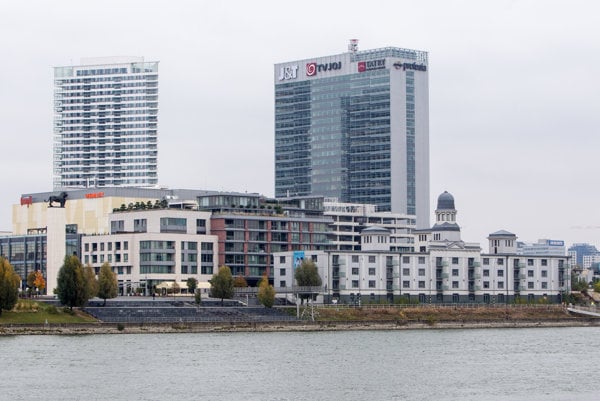 Bratislavans have already watched the demolitions, and also rather insensitive conversions, of several historical industrial buildings, for example Gumonka or Kablo. Now they see the deterioration of the iconic Warehouse Nr 7, whose reconstruction plans from nine years ago won a prize of preservation experts. This national cultural monument has been closed for four years, after its cellars were flooded by waters from the Danube. This exceptional building now awaits its next reconstruction.

“Its reconstruction is under preparation,” Oľga Hammer, PR manager of the multipurpose centre Eurovea on the embankment of the Danube told The Slovak Spectator.

However, she refused to specify either the time or financial framework of the plans. She also did not specify for what purposes the building might be used in the future.

“Everything is in the phase of preparations,” Hammer said.

For the time being, the extension of Eurovea towards the Apollo Bridge is under the control of its owner, Peter Korbačka from the financial group J&T, is in preparation. Korbačka bought Eurovea back in 2014.

Preservation experts as well as architect Branislav Kaliský from the architectural studio A1 Respect, which participated in the reconstruction of the warehouse as well as designing Eurovea, can imagine usage of the former warehouse of grain as a gallery, an auction hall or for holding social and cultural events. But for now, the biggest threat is that the building remains unused.

“Long-term disuse of the building leads to its degradation,” Gabriela Habáňová from the Regional Monuments Office of Bratislava told The Slovak Spectator, adding that if disinterest in the building persists, its reconstruction would end completely in vain.

Reconstruction of the warehouse was part of the building of Eurovea consisting of a mall, apartments and offices with a price tag of €350 million. Originally, the developer Ballymore Properties, planned to reconstruct it and later rebuild it to replace the Park Kultúry and oddychu (PKO) cultural, social and education venue on the Danube embankment. But in the end, only the first phase of the €7.7 million project materialise.

The building underwent a €3.3 million construction between 2006 and 2007. This process was demanding as the building had not been used for many years and was at the mercy of homeless people. It suffered from structural flaws, busted windows and doors, and other technical issues. During the reconstruction the structural supports were fixed and the building was insulated. All technical details inside as well as outside of the building were reconstructed. The building also got a new roof. Windows and doors were replaced with replicas of the originals, while the interior kept its original condition.

The Regional Monuments Office of Bratislava evaluated the reconstruction of Warehouse Nr 7 as an example of cultivated renewal. The project also won the prize of the magazine Pamiatky a Múzeá (Monuments and Museums) in the category renewal, in 2007.

As Habáňová specified, the renewal salvaged the building and created prospects for its future existence.

After the reconstruction, the former warehouse was opened to the public in 2007 when it initially served as a marketing pavilion in which people could see how the new development Eurovea would look like, or buy an apartment in it. Later it hosted various social and cultural events. But the flood in 2013 flooded its ceilings and since that time the building has been closed.

Why is Warehouse Nr 7 exceptional?

Warehouse Nr 7 is a national cultural monument. Its construction in the 1920s was connected with the growing importance of the Bratislava port at the level of international river ports, according to Habáňová. This industrial building is appreciated for its progressivity and modern solutions. Originally it served as a warehouse for grain and was full of non-traditional details and solutions.

“It is more beautiful, proportioned and technically sophisticated than most of today’s buildings for housing or offices,” said Kaliský. “And it was so even though it served only as a warehouse.”