Out of state university and teaching hospitals, the Teaching Hospital Nitra won the Hospital of the Year 2016 award. Among general hospitals, Stará Ľubovňa hospital won, the INEKO think-tank found in its evaluation. 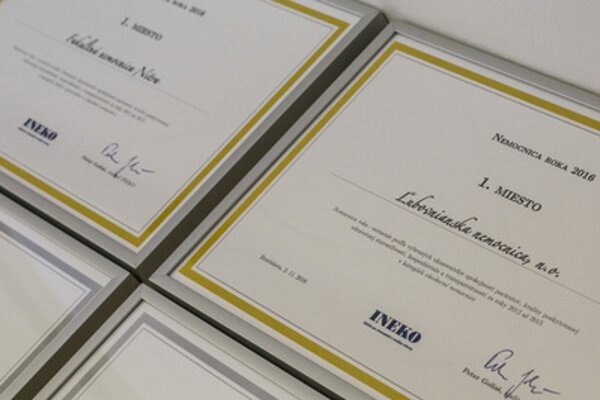 The goal was to motivate hospitals to improve and achieve better results, from which they and ultimately their patients will benefit, INEKO head Peter Goliaš told the TASR newswire. He added that under such positive pressure, hospitals may be motivated to offer higher value for the public resources that flow into them every year. This time round, INEKO published a full placement of hospitals, on nemocnice.ineko.sk.

The Nitra hospital has clearly the best economic results of all state teaching hospitals, and pays its invoices on time, the only one in this category, according to the think-tank. It can also boast of its low need to repeat surgery and low mortality rate following intensive care. However, the winning hospital does not show very good numbers in terms of mortality in acute cerebro-vascular accidents and its marked weak point is its mainly low openness towards the public. In this category, the Teaching Hospital and Policlinic of F. D. Roosevelt in Banská Bystrica placed second, followed by Central Military Hospital in Ružomberok.

The Stará Ľubovňa hospital achieved, according to INEKO, highly above-average results in all of the four categories evaluated – which none of the general hospitals did. It also has very satisfied patients who almost never file complaints, and it is the most transparent hospital in its category. It has a low rate of re-hospitalising patients, as well as low mortality rates after surgery and in wards, after transfer from intensive care unit. Its weaker point is the relatively high mortality in the intensive care unit. Košice-Šaca hospital placed second in this category, and Poprad Hospital, third.

The hospitals awarded had to pass qualification criteria of complexness and a sufficiently big sample – and get the greatest number of points. The period 2012-2015 was evaluated, with earlier years bearing a smaller relevance. INEKO compared hospitals in four main spheres: satisfaction rate of patients, quality of health-care services rendered, economy and transparency.