The courts will decide over the assets of the dissolved trade union organisation. 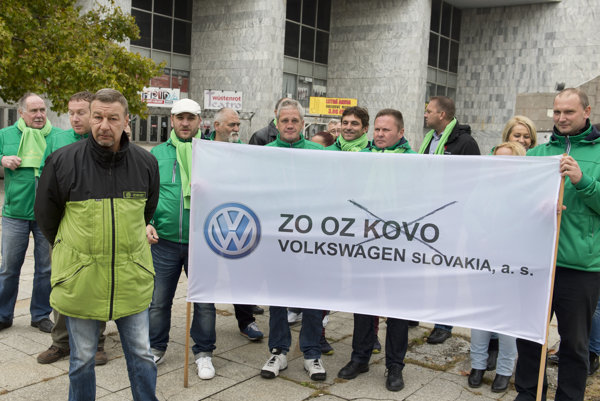 The conflict between OZ KOVO, the organisation uniting trade unionists from the machinery industry and led by Emil Machyna, and trade unions at the carmaker dates back to the election of the leader of trade unions in Volkswagen. At that time the then-leader Smolinský, who had already been leading the organisation for eight years, was running for the post again. His rival was Koloman Kraslan, reportedly a man close to Machyna.

In June, Smolinský won by a high margin of votes. But as Smolinský claimed, after Kraslan continued to plot against the democratically elected committee, they excluded him from the local trade union organisation. Machyna and OZ KOVO protested against this step and after Smolinský refused to change the decision, they responded by dissolving the whole trade union organisation at the carmaker on October 11, claiming that by ousting Kraslan, they violated OZ KOVO’s statutes.

Smolinský challenged the scrapping of the organisation in court, arguing that they did not violate OZ KOVO’s statutes when they ousted Kraslan. He sees behind OZ KOVO’s actions the ambition of OZ KOVO to take control over the trade unions in VW and its assets exceeding €1million.

OZ KOVO, on the other hand claims that Smolinský, along with the committee, were continuously violating OZ KOVO’s statutes, misleading its bodies and were not respecting its decisions. OZ KOVO filed a complaint in court against Smolinský for misleading, defaming and spreading false information. OZ KOVO will also claim before the courts access to assets of the dissolved organisation.

Now it will be the courts that will decide about the assets. These, as the reserve fund of carmaker’s employees, amount to approximately €1 million and officially belong to the original trade union organisation falling under OZ KOVO. But Smolinský refuses to hand them down to OZ KOVO, arguing that they belong to trade unionists and employees of VW.

Machyna sees the date when Smolinsky launched the new organisation as proof that this step was planned and that it was not a response to the decision of OZ KOVO from October 11 to liquidate the organisation.

“So far we have focused especially on internal affairs,” said Smolinský, adding that they plan to primarily focus on membership in international organisations, from where they took inspiration when setting up processes and the general philosophy of their new organisation. “But of course we are open to any platform helping to improve the position of those working in Slovakia.”

The Confederation of Trade Unions (KOZ) has already indicated that it would not intercede in the conflict.

“Trade union organisations have autonomous positions, they have their own statutes,” said Martina Nemethová, spokesperson of KOZ. “The arisen situation is an internal situation of OZ KOVO.”

Management of Volkswagen Slovakia refuses to comment on the situation for now.

“It is an internal affair of trade unions,” Lucia Kovarovič Makayová, spokesperson of VW SK told The Slovak Spectator.