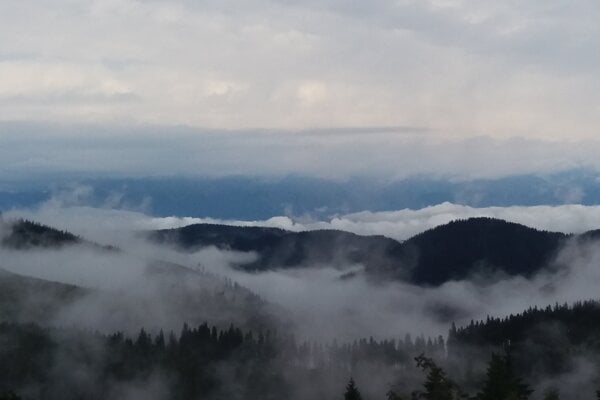 Thanks to the Olympic snorer I was in the ideal situation to hear the start and subsequent continuation of the tropical storm that struck during the night. It rained elephants and hippopotamuses – so it might have been an equatorial storm. And it kept going. Most of our sleeping companions were up at the crack of dawn, packing rucksacks quietly, ha ha, and getting ready to set off. Into the rain! Madness. Probably wanted to see the snake (see Day 23).

We stayed on the mattresses, until the rain stopped. Then went out for breakfast; párky (nutritious and healthy hot dogs) and mustard: just to continue the gastronomic tour of Slovakia. The views were spectacular with the low clouds hanging in the valley below us. We passed up the opportunity for a bath in the spring outside – it was liquid, but just. 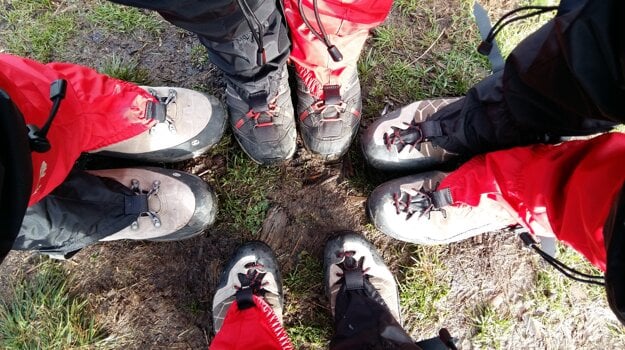 Off we set into the mist or possibly fog: we couldn’t see which one it was because of the fog or mist. We were in shorts and t-shirts as it was, of course, up. The break in the storm lasted until we got out of the shelter of the trees, then the heavens opened again. Eventually, we were forced to take shelter behind a conveniently placed big boulder. It kept us dry as the rain and, at that point, hail were falling horizontally. We put on every bit of clothing that we had, this included hats and gloves. It was bloody freezing. More chance of Polar bears (Ursus Nothereeither) than Brown bears (Ursus Nonevidens).

The highlight of the day was to be the television tower on Kráľova Hoľa with views all around. But the fog, we had definitely decided by then, was promising to make the view a bit, shall we say, indistinct. I have always thought that the top of hills should have the views in Braille – just for days like today.

We finally came to the sign post on top of Kráľova Hoľa, and were looking at the memorial, a 3m obelisk, commemorating something or other – it was too cold to look. Then my son said look at those wires. Everyone turned to look, but I was slow. So I got to see the huge red and white television tower appear out of the fog about 30m in front of us. Then I said ‘look at that’: the looks of disgust from the other three were pictures. They had all seen the memorial, was I blind as well as deaf. But their looks changed to incredulity when they noticed the 137m red and white tower appearing out of the fog.

We had lunch in a room at the bottom of the tower, kindly provided by the tower, to avoid break-ins and possibly the occasional death from hyperthermia. The sun came out and the views were perfect. Rain, hail, intense cold all forgotten. 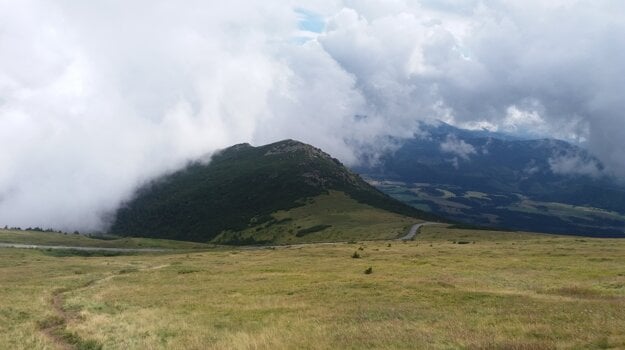 Down to Telgárt, historically a place for the Hilter Youth to play – we were told. Our accommodation that night was fantastic – better than home. Pizza and sleep.