Passengers may now fly from Bratislava to Tehran and Beirut

Ryanair has launched its first Asian destination from the Slovak capital, Israel’s Eilat. 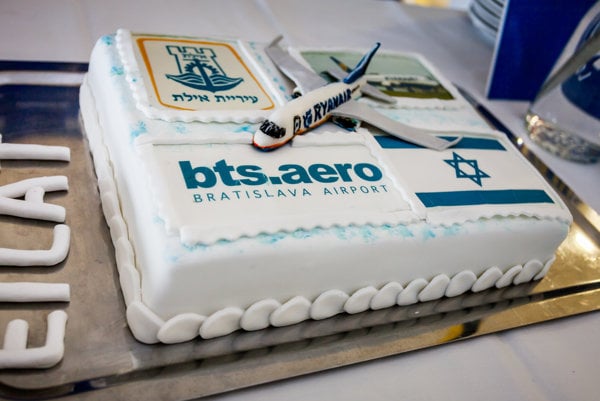 A torte was waiting for passengers from Israel (Source: Courtesy of M. R. Štefánik Airport in Bratislava)
Font size:A-|A+

The list of new destinations offered by Bratislava airport is getting longer and more exotic. After the Irish low-cost airline Ryanair launched its first Asian destination from the Slovak capital in early November, Bratislava airport indicates that it could soon offer two new destinations – the Iranian capital Tehran and the Lebanese capital Beirut. The two new routes could be launched next year, M. R. Štefánik Airport in Bratislava general director Ivan Trhlík informed on November 6.

“It’s possible that [flights to] Beirut [could begin] even this year,” said Trhlík as cited by the TASR newswire.

As the new routes will be operated by airlines that have not flown to Europe before, they still lack certain technical permits required by the European Aviation Safety Agency.

“So, we are working on it together, and I believe that after obtaining these certificates nothing will prevent them from flying,” said Trhlík.

The first passengers on the new Ryanair route from the Israeli town of Eilat to Bratislava landed at M. R. Štefánik Airport on November 3. This is the Irish low-cost airline’s first Asian destination from the Slovak capital. Until now it was offering only flights within Europe.

Trhlík is convinced that the new route will be successful.

“We have great expectations from this route because it connects Bratislava with a renowned airport in Israel,” said Trhlík.

Israeli Ambassador to Slovakia Zvi Aviner Vapni is also hopeful regarding the new route, describing it as a new bridge between Slovakia and Israel that will allow both nations to get to know each other better. Moreover, Eilat can offer a warm refuge for Slovaks during the winter, he added.

However, Slovakia also has a lot to offer tourists from Israel, noted Aviner Vapni, who mentioned the Slovak countryside and many interesting things in the capital Bratislava.

Flights between Ovda airport and Bratislava will take place twice a week – every Thursday and Sunday.

In addition, a new route to Kiev, the capital of Ukraine, will be launched as of December 17.

As for 2017, a route to the city of Tuzla in Bosnia and Herzegovina will be added as of March 27 and one to the Polish capital Warsaw will appear as of June 30.