While 79 MPs voted for the amendment at an approval session on October 26, the final approval after the president’s veto requires the votes of at least 76 of them.

Slovak President Andrej Kiska vetoed the amendment on the Parliamentary Rules of Procedure Act which the parliament adopted on October 26, the SITA newswire reported.

The state head returned the amendment to the parliament as the procedure, which the proposers of the amendment chose before and during the adoption, may be unreasonable political pressure by the current house majority aimed at limiting the effective operation of the opposition minority, said spokesman of the president Roman Krpelan.

“Hence, it is an intervention into the political rights and freedoms guaranteed by the Slovak Constitution including the freedom of speech,” said Krpelan, as quoted by SITA.

While the president considers the question of political culture, level and content of political discussions, parliamentary debates included, one of the factors affecting confidence of citizens in the state and its institutions, he doubts whether it is possible to dictate matters of good manners and basic decency of elected political representatives through the law.

“If there was a drive to improve the parliament’s culture, I would point out that the majority is always in a position of power and thus must be an example of political culture with its approach, respect to written and unwritten rules and raising of political responsibility,” said Kiska, as cited by SITA.

The current legislation contains sufficient mechanisms to ensure the effective functioning of the parliament and the approved amendment permits vexatious management of plenary sessions of the parliament, said Kiska. The president proposed to reject the amendment also for legislative-technical drawbacks including ambiguous terminology in repeated votes in the parliament’s committee on a procedural proposal of candidates for posts of judges of the Constitutional Court. 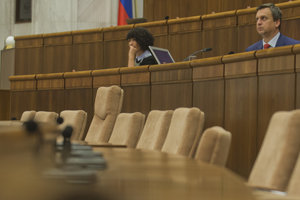 The Speaker of Parliament Andrej Danko respects the decision of the president, said Zuzana Čižmáriková from the Parliament’s Office.

“The proposal to amend the rules of procedure will go by the standard procedure at the next parliamentary session,” Čižmáriková told SITA.

While 79 MPs voted for the amendment at an approval session on October 26, the final approval after the president’s veto requires a majority of votes, at least 76 of all 150 MPs.

The amendment, prepared by the ruling coalition headed by Danko to ensure effective operation of the parliament during its sessions, determines maximum time of MPs speeches in the plenary debate, prohibits use of audio, video and audio-video equipment in debates and also prohibits bringing food into the parliamentary hall, SITA reported.