Main highway link to be widened

But more lanes may not solve traffic problems. 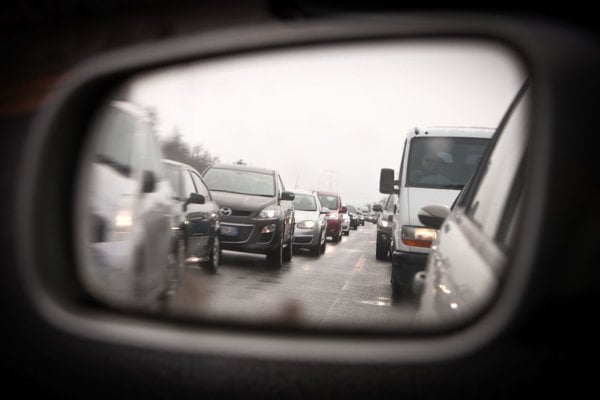 Stationary traffic and at least one accident nearly every day: this is the miserable daily reality for many commuters driving into Bratislava via the city’s busiest highway link, the D1. Now they will also have to face months of roadworks and speed limits on the road, as the government has decided to widen it to create a total of eight lanes. Despite hopes that these extra lanes will ease traffic, analysts warn that they will not solve some fundamental problems.

“It is the only possible solution we currently have, but it does not solve the fundamental problem represented by people living in municipalities close to the highway,” Ondrej Matej, from the Institute of Transport and Economy (IDH), told The Slovak Spectator.

The plan has already been embraced by the Transport Ministry.

“The construction of roads is not a political, but an expert decision and I believe in the opinion of experts who say that the best solution for Bratislava will be to widen the highway to four fully-fledged lanes,” said Transport Minister Árpád Érsek (Most-Híd), as quoted by the TASR newswire.

The expert commission ruled the original proposal, for six lanes with collector roads, to be ineffective and uneconomical.

Moreover, it was rejected on safety grounds, and because of the need to ensure smooth traffic flows on the stretch ending with the Triblavina junction, just outside the city.

“The proposal with collector roads is a collision arrangement, particularly regarding the number of collision points and intersections with adjoining roads,” reads the official press release.

The NDS plans to carry out construction on the Bratislava-Trnava stretch in several phases, applying minimal transport limitations. The detailed project for organising traffic during construction work should be prepared by the end of October 2017, and the work completed by the end of November 2020.

“We consider the proposed eight lanes for the D1 as the maximum, and do not recommend increasing it in the long-term horizon,” the working commission said, as quoted in the press release, adding that they do not want to concentrate transport in one spot, but rather to disperse it among several entrances to the city.