After four years the €294 million project to enable a speed of 160 km/h on the 12-km Zlatovce-Trenčianska Teplá rail route is still not complete. 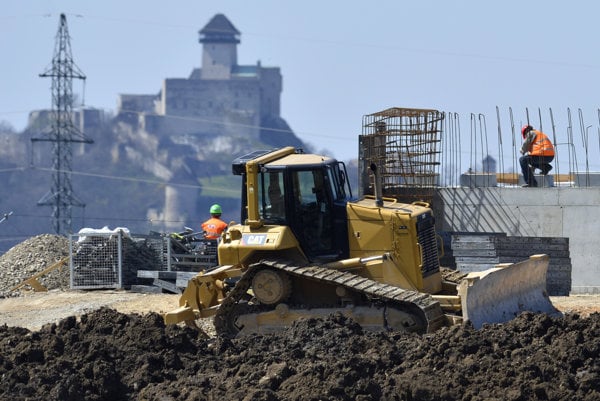 For now the rail road was upgraded up to Zlatovce near Trenčín. (Source: TASR)
Font size:A-|A+

Modernisation of 12 kilometres of railway between Zlatovce near Trenčín and Trenčianska Teplá will be not be completed by the already postponed deadline of November 31. Originally the railway should have been upgraded to enable trains to travel at a speed of 160 km/h by February. But later the supplier and the state railway operator Železnice SR (ŽSR) agreed upon postponing of the deadline to the end of November.

But now it is clear that the builder, Združenie pod Brezinou led by the TSS Group, will not meet the postponed deadline as several parts of the railway stretch have not been finished yet. The builder is now specifying reasons why it has been failing to complete the project within the deadline while the builder and ŽSR are also discussing a new deadline, explained ŽSR spokeswoman Martina Pavlíková as cited by the TASR newswire.

The project of modernisation of the Zlatovce-Trenčianska Teplá rail route is one of the priorities of the new ŽSR general director Martin Erdӧssy who was installed in his position on November 3. He has inherited this project from his predecessors.

The primary goal of Erdӧssy is to speed up and make the construction works more effective and to ensure they are carried out to the required quality standard so that the whole construction is completed in as short a time as possible.

“ŽSR again apologises to all the affected citizens of Trenčín and its vicinity for the temporary restrictions linked with the realisation of this construction and simultaneously they dare to ask for patience and understanding during the completion of one of the biggest and most important constructions of modernisation to the railway corridor in Slovakia,” said Pavlíková.

ŽSR clinched the agreement for modernisation of the rail route in October 2012. Apart from the TSS Group members, the consortium includes Czech company, Bӧgl and Krýsl and Croatian company, Konstruktor-Inženjering. The price tag of the troubled project is €294 million including VAT. It is the third phase of modernisation of the rails between Nové Mesto nad Váhom and Púchov. The plan is to upgrade the rail route between Bratislava and Žilina to enable a speed of 160 km/h by 2020. The upgrade has currently been completed as far as Zlatovce near Trenčín.

Originally the modernisation of the Zlatovce-Trenčianska Teplá route should have been co-financed from the EU funds during the 2007-2013 programming period but due to the questionable course of the tender for the builder and several lawsuits, the state will have to finance the project from its own sources or might try to finance part of the project from the new EU programming period 2014-2020.