Korčok: EU should be less obsessed with Trump

The state secretary comments on Slovakia’s actions as the presiding country of the EU Council. 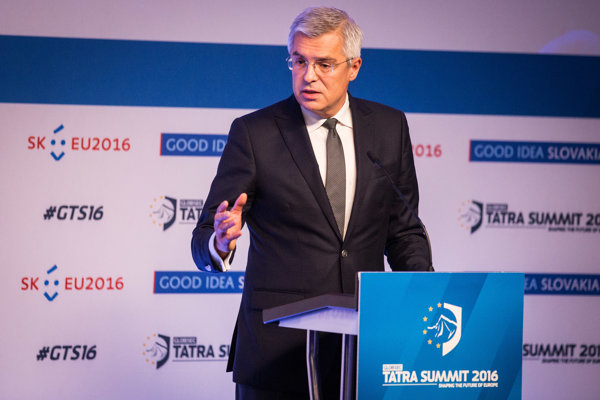 The Slovak presidency of the EU is producing “tangible results” in a challenging time when the European Union should better define its interests, said Ivan Korčok, state secretary for the Slovak Foreign Affairs Ministry, in an interview with the EUobserver.com website.

He went on to say that he “definitely would be satisfied” with Slovakia’s actions.

“The context could hardly be more challenging,” Korčok told EUobserver.com, pointing to the Brexit vote and Donald Trump’s victory in the US presidential race.

When commenting on the EU’s signing of the Paris climate deal and the Comprehensive Economic and Trade Agreement (CETA) with Canada, as well as a deal on the EU budget for 2017, Korčok commented that “there were results and there were moments when we did not expect such momentum”.

The EU agreement on CETA “was not something that fell from the sky to our table”, Korčok said, adding that they only did their job.

“Problems emerged after we had ensured the agreement of all member states on the text,” he told EUobserver.com, referring to the last-minute opposition from Belgium’s Wallonia region.

He admitted however that no agreement would be reached on the reform of the EU asylum system, one of the thorniest issues for Slovakia which opposes the relocation of migrants.

“We sense that we are far from having a consensus, but that countries recognise we need to move on this,” Korčok said.

He went on to say that solidarity is more than mandatory quotas and that the proposed system will not work.

“Our commitment was to test whether we are politically ready to think beyond the scheme of mandatory quotas,” he added, as quoted by EUobserver.

Slovakia meanwhile presented a proposal for a so-called effective solidarity, a more consensual version of “flexible solidarity” first put forward by Slovakia and its partners from the Visegrad Group (V4) – Poland, Hungary and the Czech Republic.

When commenting on the proposal and the criticism from Italian Prime Minister Matteo Renzi over the lack of solidarity of some countries, he claimed that the mandatory quotas will not relieve some countries, including the final destinations. He stressed that more flexibility is needed.

Korčok insisted that “it should be accepted that some countries where migrants will not stay are ready to help in other forms”, like proposing facilities, financing projects or sending people to manage the borders.

Korčok also commented on the Brexit vote, claiming that it created a difficult situation for the Slovak EU presidency, as “more people are looking to London than to Brussels and their minds are focused on when the UK will start the exit talks”.

But he added that there was “no major problem” in the daily legislative work, for which the EU presidency is mainly responsible.

Another challenge for the EU comes with Trump’s election win. The EU should not “be obsessed by speculating what US policy will be”, because it has “no evidence yet of what Trump’s programme will be”, Korčok said.

He sees the US as “more than a partner, a key ally”.