The charges concern the claims that the prime minister owns a shell company and has bank accounts in Belize.

Chair of the Ordinary People and Independent Personalities (OĽaNO-NOVA) Igor Matovič has been accused of slandering PM Robert Fico (Smer). The charges concern the claims that the prime minister owns a shell company and bank accounts in Belize, the Aktuality.sk website informed.

Matovič first published his suspicions on social networks in mid-August 2015 and then also held a press conference. A few weeks later he allegedly found an anonymous letter in his letter box, hinting that Fico and his wife founded a shell company in Belize in 2008. The company allegedly opened two accounts in Belize Bank International, on which some $674 million were deposited by July 21, 2015. 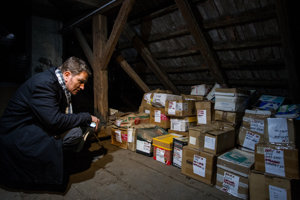 Matovič confirmed the charges for Aktuality.sk, adding he has not read through the file carefully yet.

“Of what I already know, the investigator has accused me without checking whether Robert Fico owns a shell company in Belize or not,” Matovič told the website. “It was enough for him to receive the confirmation from Fico that he has no official account in Belize.”