Adient wants to make seats not just for cars, but also trains and aircraft. 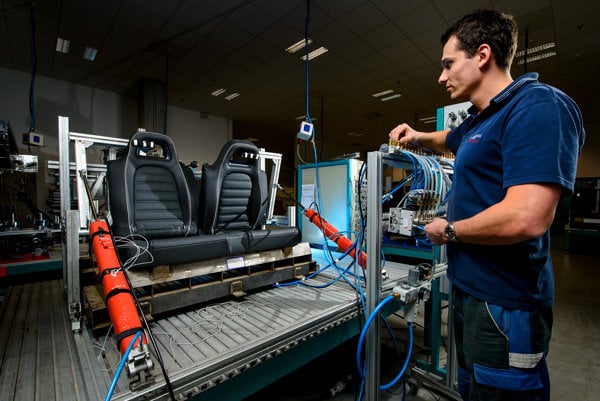 The spin-off of Johnson Controls’ former automotive seating and interiors business, to form a separate entity, Adient, should bring new growth opportunities to its facilities in Slovakia. These include also the country’s biggest automotive technology centre, located in Trenčín. While it is focusing on the latest trends, like autonomous driving, which promise to completely transform car interiors, Adient says it also wants to enter the markets for rail and aircraft seating.

“Our vision is that we want to improve the experience of a world in motion,” said Frank Toenniges, executive director of the technology centre in Trenčín, in mid-October, prior to the official spin-off on October 31. “And I am not talking only about cars.”

Why Adient was created

“So that gives us better access to capital, more opportunity to invest into innovations and is just a great opportunity for us, as Adient,” said Roznowski.

The story of the Trenčín centre started in 2003 when Johnson Controls was looking for a location for a new technology base. Apart from Slovakia, the Czech Republic, Bulgaria, Romania, Poland and Hungary were also considered as possible sites.

“At that time, automotive production in Slovakia was around 200,000 vehicles per year,” said Toenniges, recalling that at that time, only the Slovak arm of Germany’s Volkswagen was manufacturing cars in Slovakia. In the same year, 2003, PSA Peugeot Citroën announced it was setting up a manufacturing plant in Trnava.

Slovakia was chosen by Johnson Controls in what turned out to be a close competition with the Czech Republic.