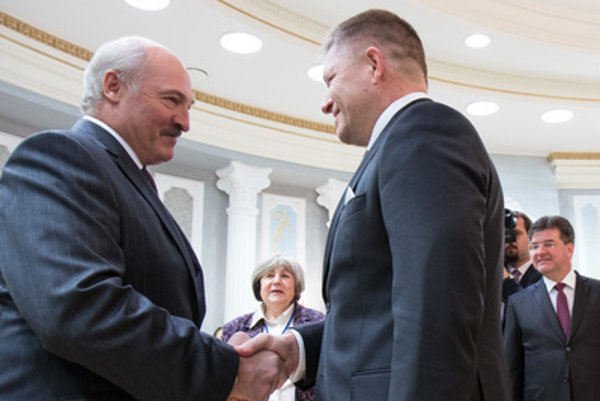 Slovak Prime Minister Robert Fico has become the first top European Union member state’s representative to arrive for an official visit to Belarus after a long break. The relations between the EU and the regime of President Alexander Lukashenko have been cool due to undemocratic elections and suppressing the opposition.

The EU banned Lukashenko and dozens of his close people from entering its territory back in 2006, the Pravda daily wrote; it cancelled the sanctions only at the beginning this year. European leaders usually avoid visits to Belarus. The last one to officially visit the country was Lithuanian President Dalia Grybauskaite in 2010. French President Francois Hollande and German Chancellor Angela Merkel arrived to the country in February 2015, too, but it was only to discuss the situation in Ukraine.

Fico visited Belarus on November 25, and he said that the situation there has improved. He called the visit a new impulse in mutual relations. “Why shouldn’t [an official of] Slovakia visit Belarus? Especially after the European Union scrapped sanctions against this state in February 2016,” said Fico, as quoted by the TASR newswire.

Cooperation in the pharmaceutical industry was discussed as a top priority by Fico and his counterpart from Belarus Andrei Kobyakov. “It mainly concerns research but also drug production for treating oncology [cancer-related] and other diseases,” said Fico. Belarus further offered cooperation with Slovak companies producing special laser devices for hard wood treatment, and cooperation in the rubber industry, energy and petrochemicals. “There’s interest among some Belarusian companies in exporting petrochemical products to Slovakia; for example, liquefied gas,” said the Slovak PM, who also discussed EU relations with Belarus, noting that Slovakia as the country presiding over the EU Council is ready to be active in related discussions.

“I welcome the fact that an absolute majority of sanctions against Belarus was scrapped in February of this year. Sanctions are harmful and don’t serve anyone,” said Fico. According to him, Slovakia views Belarus as a friendly country. “I regret one thing, namely that the quality of relations that have been constructed gradually ... still hasn’t been translated into better economic relations.”

While bilateral trade was at $270 million five years ago, the figure stood at a mere $170 million in 2015, Kobyakov noted. He added that he sees Fico’s visit as testimony of Slovakia’s readiness to revive bilateral cooperation in general.

After returning home, the Slovak PM also defended his Belorussian visit in the V Politike (In Politics) TV show on private TV channel TA3, on November 27. He described the trip as “maximally successful”, adding that Belarus has economic potential that could be used by Slovakia. Belarus is part of the EU's Eastern Partnership, an official programme of the Union for six Eastern European countries. “This country has a presidential system, with the president being the strongest person, so that’s why I also met him,” said Fico in response to the question about why he went to see Alexander Lukashenko, even though he’s viewed by many as “the last European dictator”, according to the anchor.

Fico said that he does not interfere with the internal affairs of other countries. “Let’s resolve our issues first, and then we can begin telling others how they should behave,” he argued, adding that “[Belarus] has also been visited by French President Francois Hollande and German Chancellor Angela Merkel."