The father and son however remain in prison on other charges. 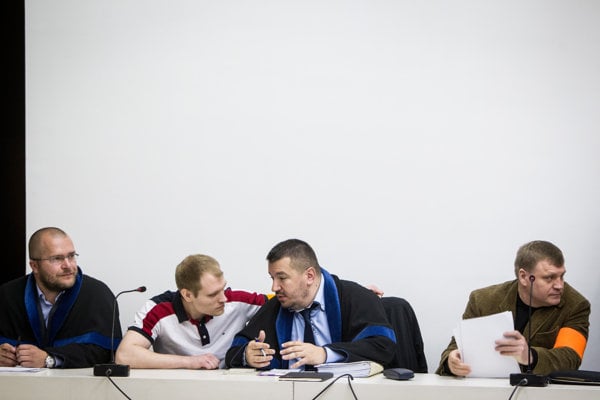 Sergey and Alexander Salmanov and their lawyers in April 2015 (Source: SME)
Font size:A-|A+1

The Supreme Court has confirmed the verdict of the Specialised Criminal Court issued last July, which released businessman Sergey Salmanov and his son Alexander from the charges of bribery.

The ruling is valid and cannot be appealed, the TASR newswire reported.

The accusation against the Salmanovs stated that they unwarrantably secured VAT refunds amounting to more than €443,310 back in April and May 2010. This was managed by former head of the tax office in the Dunajská Streda (Trnava Region) Dušan K., who allegedly received a bribe of €40,000 for carrying this out, the prosecutor’s office claimed. 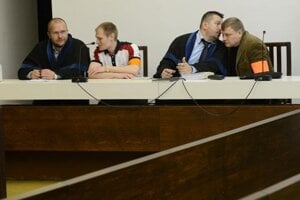 The Supreme Court’s senate confirmed the past ruling sentencing Dušan K. to seven years in prison for accepting the bribe from the Salmanovs although they have been released from those charges now, as reported by TASR.

The court in fact supported the opinion of the Specialised Criminal Court that the evidence had not proven that the crime had happened. They were disapproving of the fact that the testimony given by the former head of the tax office in Šamorín (Trnava Region) Mária Z. was not backed by more evidence.

Though Mária Z. had also received a bribe in the past, she started cooperating with police. As a result her prosecution has been suspended, TASR wrote.

Sergey and Alexander Salmanov however remain in prison as they have been sentenced for bribing Mária Z, Sergey Salmanov for seven years, Alexander for six, TASR wrote.