Childcare in the parliament? In Slovakia, not for now

In some western democracies, public institutions lead the way in promoting gender equality. In Slovakia it is the other way around. 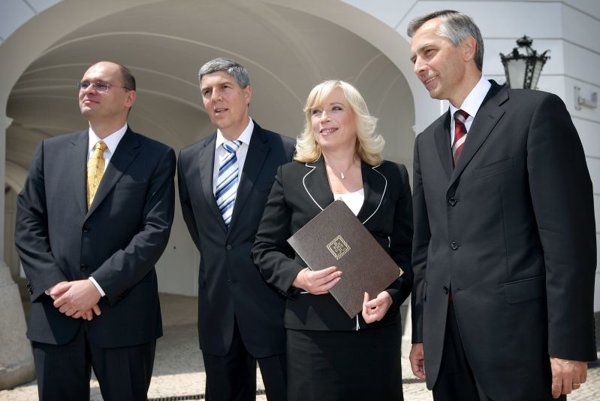 Iveta Radičová with her coalition partners in 2010. She was the first prime minister, but in Slovakia, politics is still mostly a men's job. (Source: SME)
Font size:A-|A+

Justin Trudeau, who was elected last year, is the first Canadian prime minister to give the country a cabinet in which the ministerial posts are equally divided, 15:15, between men and women. When asked why, he simply said : “Because it’s 2015.”

Back to Slovakia. In early September 2016, Deputy Parliament’s Speaker Lucia Ďuriš Nicholsonová, an opposition MP, complained on her blog that Parliament’s Speaker Andrej Danko bullied her. She reported that Danko told her just days before she delivered her baby that if the child prevents her from fulfilling her duties in her post in the parliament’s leadership, she would lose her job. In an open letter Danko denied her words and said that he respected her decision to raise a child while in parliament.

Nicholsonová was back in parliament five days after her caesarean delivery, because Danko’s office scheduled her to lead part of a parliamentary session. Even though she was not happy with the decision, as she said, she accepted the challenge. Danko said he did not understand her complaints because she pledged that her parenting duties would not influence her work.

Anti-discrimination laws not put to work

Nicholsonová is Slovakia’s first politician to stress the complications that a mother-politician faces. The parliament recognises no exceptions for MPs who are also mothers and observers admit that in Slovakia, politics is still considered to be a man's job.