The windstorm which hit Slovakia on December 2 caused considerable damage in several areas around Slovakia. 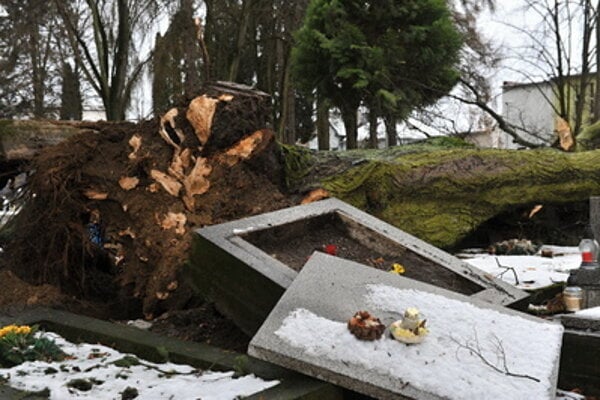 The graves of personalities of nation-wide importance, as well as many others, were damaged during a windstorm on December 2. (Source: TASR)
Font size:A-|A+

Up to 60 gravestones at the National Cemetery in Martin (Žilina Region) were damaged by the windstorm which uprooted several trees on the site early that day, Martin Mayor and Deputy Speaker of Parliament Andrej Hrnčiar informed the TASR newswire.

“We’re examining the extent of the damage,” Hrnčiar said. “National cultural monuments have also been damaged, including the grave of [19th/20th century writer and politician] Svetozár Hurban Vajanský. Due to safety reasons, the National Cemetery has been closed,” he said, adding that a special commission is to be convened on December 5 to deal with the situation. “No heavy equipment can access the National Cemetery, so everything will have to be done manually and it will obviously take some time. Nevertheless, we’ll do everything possible to make the National Cemetery accessible to the public again as soon as possible.”

On the same day, an international express train en route from the town of Humenné (Prešov Region) to Prague crashed into a fallen tree between the villages of Kráľova Lehota and Východná (both Žilina Region) during a windstorm, resulting in significant delays on the busy rail route, state rail infrastructure operator Železnice SR (ŽSR) spokesperson Martina Pavliková told TASR.

The train engine and several carriages were damaged in the incident. The driver sustained unspecified injuries. “[Firefighters] provided blankets to the passengers, removed the fallen tree from the track and assisted the rail service crew in examining the route with the aim of evacuating the passengers,” Michal Kyprus from the Fire and Rescue Corps in Žilina told TASR. “A substitute engine eventually pulled the set of carriages away to the Kráľova Lehota railway station, where a firefighter evacuation bus had already been made available.”

Trains on this two-track route were still able to drive on only one track around noon and only diesel locomotives could be used instead of the usual electric one, resulting in delays on that day.