Rumours about the sale of steelmaker USSK re-emerge

Slovak millionaires rumoured to have submitted a bid for the biggest employer in eastern Slovakia.

The steelmaker U.S. Steel Košice (USSK) has again become the centre of attention in early December, when rumours about its sale re-emerged. Online versions of dailies Sme and Hospodárske Noviny reported on December 5 that Slovak millionaires have submitted a bid to acquire the steelmaker in eastern Slovakia.

The website biztweet.eu, is reporting that the bid was submitted by Czech steelmaker Třinecké Železárny which belongs to the Czech-Slovak group Moravia Steel.

The Slovak owners of the Czech steelmaker showed an interest in USSK which employs roughly 11,000 people in eastern Slovakia, late in 2015. At that time they failed to agree upon the purchase price with the owner but now an unnamed source knowledgeable about the situation in Třinecké Železárny confirmed the submission of the new bid to the weekly EURO.

The Czech company controlled by a group of Slovak millionaires - Tomáš Chrenk, Ján Moder, Evžen Balko and Mária Blašková submitted the bid for purchase of USSK last Friday in Pittsburg, the online version of Hospodárske Noviny reported, but it was turned down the same day.

“We do not comment on rumours,” said Ján Bača, spokesperson for USSK, as cited by biztweet.eu. 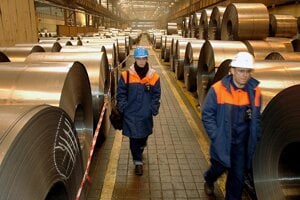 Trade unionists at USSK have confirmed rumours about submitted bids. Allegedly a Chinese investor has also submitted a superior bid to that of Třinecké Železárny, Mikuláš Hintoš, the head of trade unions at USSK told biztweet.eu.

The Chinese bid was probably presented by steel giant the Hesteel Group.

The steelmaker is in the hands of a private company but considering the fact that it is one of the biggest employers in the country and an important part of the national economy, the Economy Ministry is watching the situation closely, ministry’s spokesman Maroš Stano told the TASR newswire but they do not have any information about the sale of USSK.

“Nevertheless, a memorandum from 2013 that has kept the American owner in Slovakia and stabilised the situation at the company still holds and is being observed,” said Stano. “The Economy Ministry is communicating with the company’s management, and it doesn’t have any information concerning a sale. Similar reports in the past weren’t confirmed in the end.”