First passage of the Žilina tunnel drilled through

It should be possible to drive along the whole road by October 2018 at the latest. 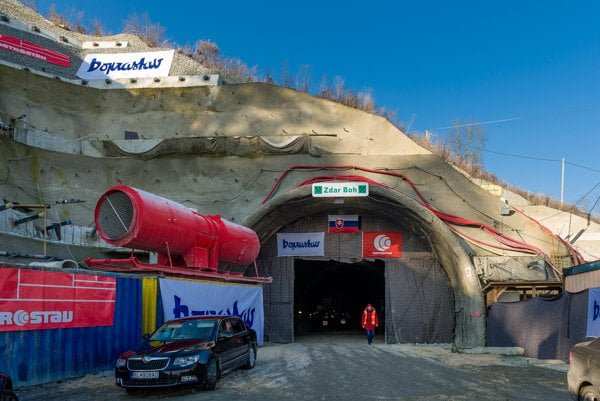 The first passage of the Žilina tunnel which will form part of the cross-country D1 highway stretch between Hričovské Podhradie and Lietavská Lúčka (both in Žilina Region) was drilled through on December 5. There are still some 80 metres to go in the case of its twin, the TASR newswire reported.

It is expected that the second passage should be fully drilled in January 2017.

“We made a little step forward today,” said Juraj Valent, head of the National Highway Company (NDS), as quoted by TASR. “I hope that the construction of the D1 Hričovské Podhradie-Lietavská Lúčka highway stretch will go at such a pace that it will be possible to drive a car along it in the tenth month of 2018 at the latest.”

The deadline, according to the contract, is December 2018, but “for the sake of reception by the public and also construction options, a better date would be before winter begins”, i.e. in October 2018, Valent added.

It is the third highway tunnel that has been bored near Žilina this year, said the region’s Governor Juraj Blanár. Moreover, according to a recent NDS report, a feeder road from Žilina should be completed along with the Highway stretch itself, he added.

Meanwhile, NDS will sign an addendum to the contract with the constructor of the highway stretch within a week, while its expected value has been set by state expertise.

The Hričovské Podhradie-Lietavská Lúčka stretch is very specific when it comes to geological conditions, Valent noted, as reported by TASR. Several potential landslide sites have been identified, while the 11-kilometre stretch also features as many as 11 bridges along with two tunnels.

The stretch is being built by a consortium of Doprastav, Strabag, Váhostav-SK and Metrostav for €427 million. The project is being funded from EU funds and the state budget, TASR reported.