Not only internationally known brands have their place in the ranking of the top largest lawyers in Slovakia. 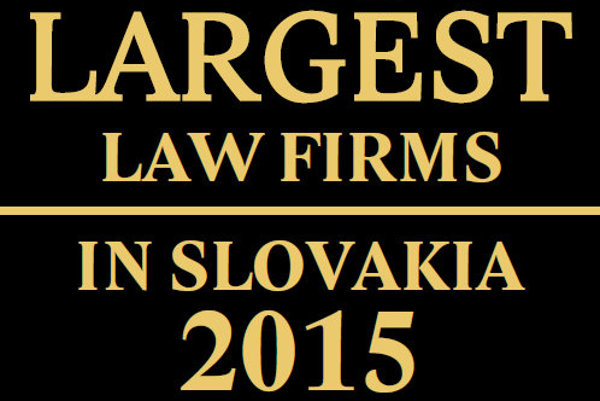 “Thanks to information from almost all the big players on the market and complementary calculations, we have prepared an analysis of the top largest law firms in Slovakia, providing an overview for Slovak as well as foreign business people,” said Ján Pallo, publisher of The Slovak Spectator. “When compiling the ranking, we used three criteria (number of attorneys, sales revenues, net profit per partner), which are used the most abroad and which speak objectively about the size of law firms.”

The 10 largest law firms achieved in 2014 a 35-percent increase year on year in revenues from the revenues from their own outputs and merchandise. The aggregate net profit of the first 10 law firms grew 113 percent compared with 2013. 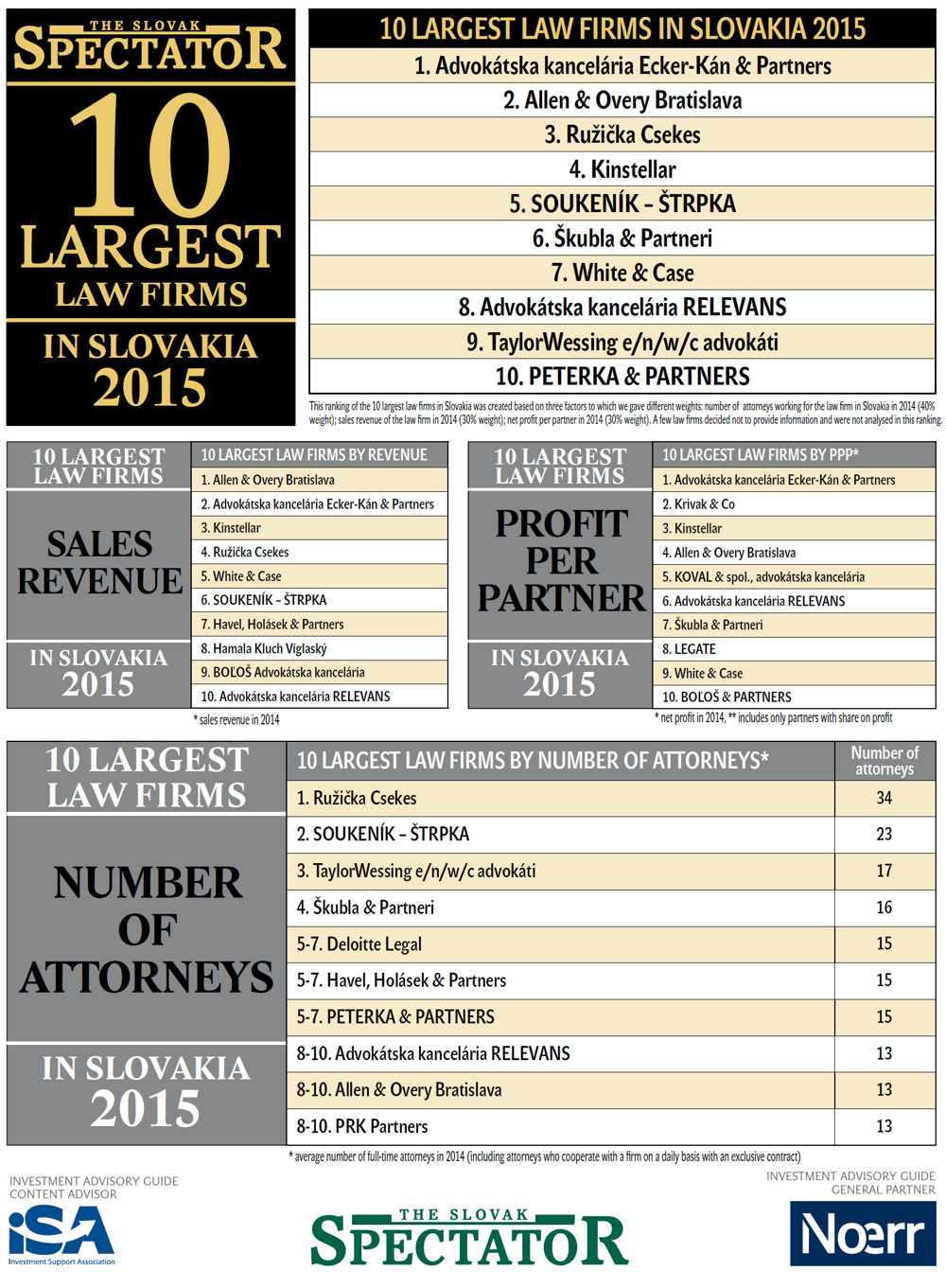 The annual Investment Advisory Guide 2015/16 published by the English newspaper The Slovak Spectator provides more detailed data with published results of the analysis as well as complex ratings.

When looking at partial criteria used when setting up the general ranting, Allen & Overy Bratislava achieved the highest sales revenues in 2014 out of all assessed law offices (together 34) while Ružička Csekes dominated in the number of attorneys. Ecker-Kán & Partners achieved the highest profit per partner. The highest number of lawyers (50) were employed by SOUKENÍK – ŠTRPKA when this number includes, apart from attorneys, also legal trainees.

When looking at the Slovak market, the position of law firms in the ranking of Slovak and international attorneys is interesting when viewed on the basis of whether it has headquarters outside of Slovakia or is in association with / integrated into an international group (network) of law firms that helps in a significant way to apply systems and processes. 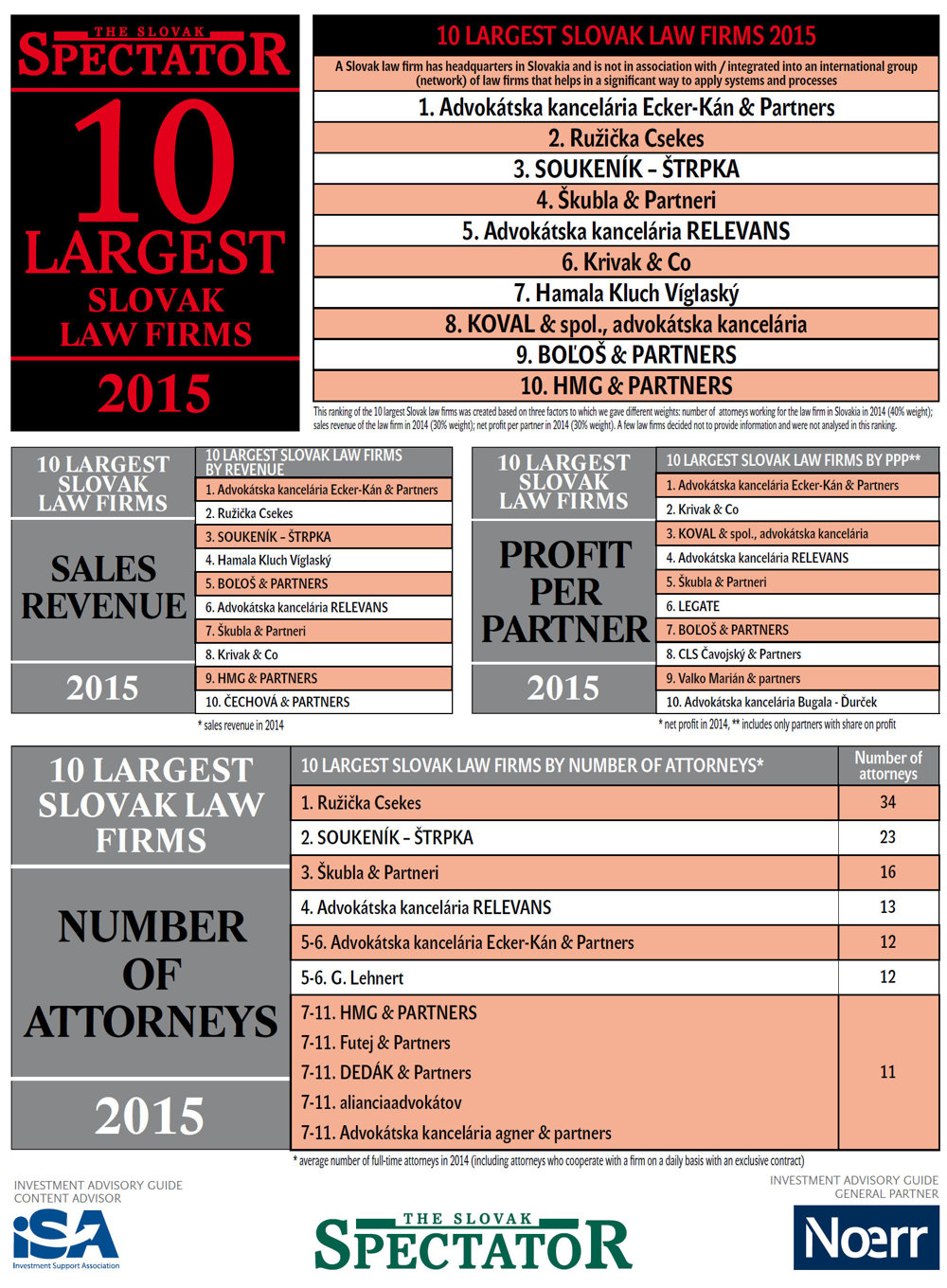 Allen & Overy Bratislava placed first among international law firms operating in Slovakia. The most significant cases in which the law firm provided legal services in 2014-2015 were:
Deal1: Slovak Telekom on its proposed IPO and listing of shares and GDRs on the LSE (aborted due to trade sale)
Deal2: Infracapital, the infrastructure investment arm of M&G Investments, on the acquisition of the Slovak utility group GGE
Deal3: Tatra banka, a.s. as the lead manager on a €30 million bond issue by the International Investment Bank
Deal4: ING Bank on the informal and formal restructuring of Doprastav, a.s., a leading construction company
Deal5: Slovenské Elektrárne, a.s. as plaintiff in a €94 million damages claim against the Slovak Republic caused by unlawful electricity price regulation 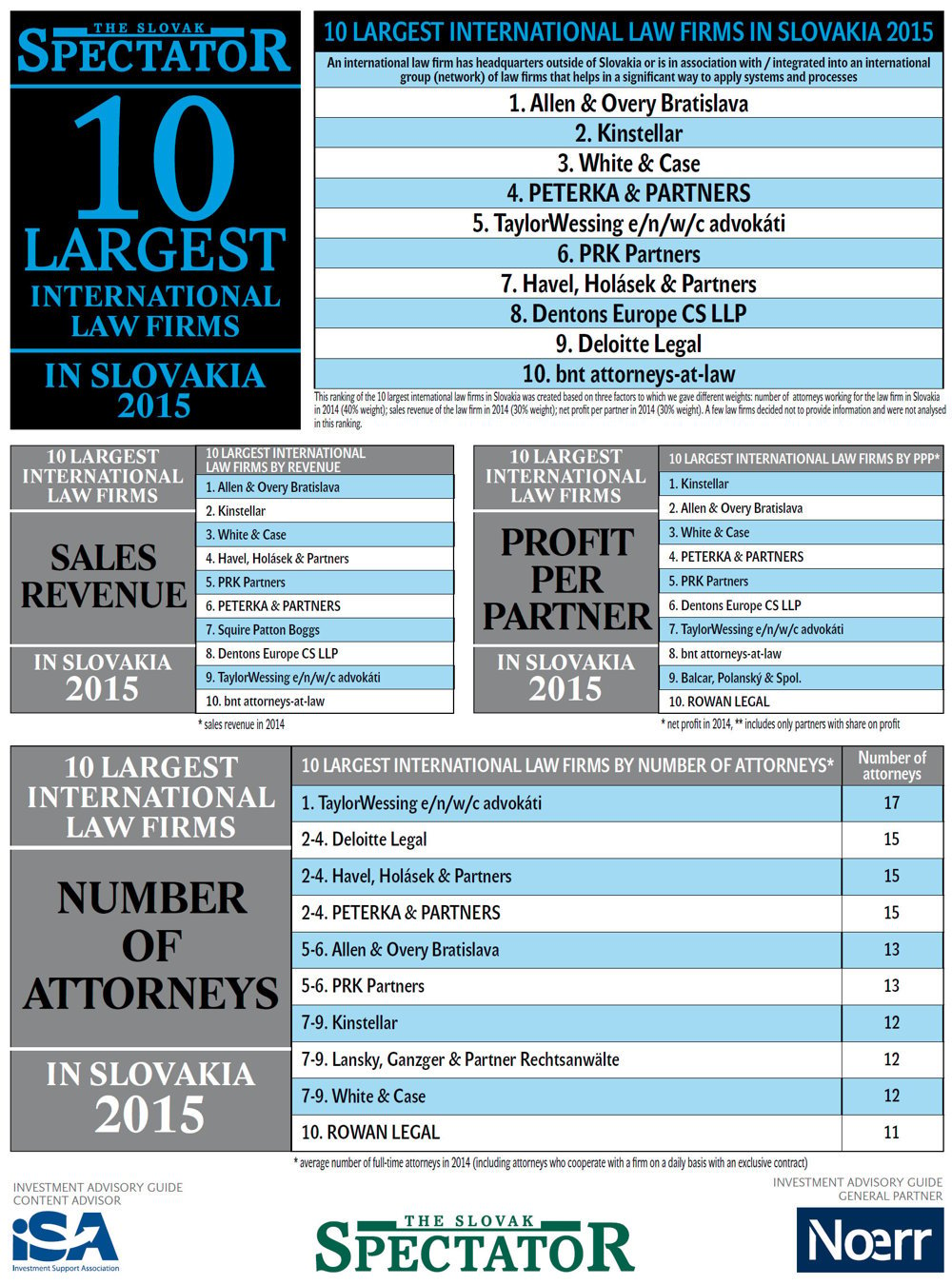 More complex information were published in the yearbook about the investment environment Investment Advisory Guide 2015/16.

When compiling the ranking of the largest law firms, there were three criteria used with the following weight:
- average number of full-time attorneys in 2014 (including attorneys who cooperate with a firm on a daily basis with an exclusive contract, 40% weight)
- sales revenue of the law firm in 2014 (30% weight);
- net profit per partner in 2014 - includes only partners with share on profit (30% weight)

The law firms that decided not to publish their data are not part of the final analysis, but based on calculations of The Slovak Spectator their potential involvement this year would have had a minimum impact on the ranking of the first positions.

About the Investment Advisory Guide
The yearbook about the business environment that The Slovak Spectator has publishing yearly since 2000 brings an overview for investors either from Slovakia or abroad. This year’s edition was published also thanks to cooperation with the Investment Support Association (ISA). The general partner of the guide is the law firm Noerr. The content of Investment Advisory Guide brings well-arranged information about the economy, the labour market, support for investors, legislation, real estate as well as investment opportunities in Slovakia. Part of the guide is also a large analysis of the market of law firms with more detailed information on the most important of them. Within this section there are simultaneously published rankings of the largest law firms in Slovakia. The yearbook traditionally contains a wealth of statistics, for example, the regional comparison of wages, unemployment, structure of industry and the overview of the largest companies in individual regions.