The light of peace from Bethlehem is in Slovakia

President Kiska wishes love to enter households along with the Bethlehem Light. 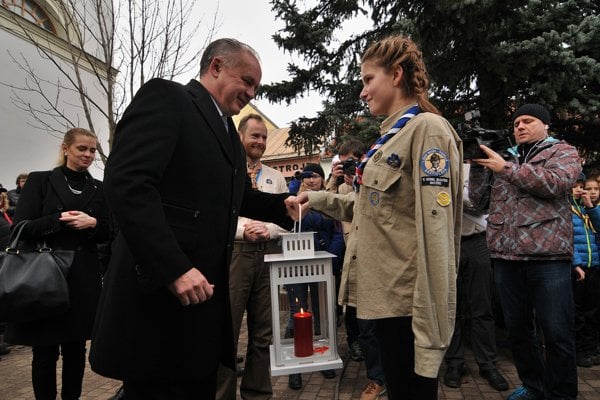 Scouts from below the Tatra mountains handed over the Bethlehem Light of Peace to President Andrej Kiska on December 11, with the president receiving it at Saint Gile’s Square in Poprad for another year. In the morning the Slovak scouts also delivered the Bethlehem Light to their Polish peers, who will distribute it all over their country. The light will then go on through the Baltic countries and via Russia to Siberia.

“The Bethlehem Light spreads peace,” president Kiska said as cited by the TASR newswire. “The Bethlehem Light is now being spread all over our country. It came from the Holy Land and I wish that love, understanding and the willingness to forgive and ask for forgiveness will enter into each household along with every single light that is lit.”

Kiska thanked the Slovak scouts for doing their wonderful job and spreading peace all over the country. The president said he will bring home the light he received from the scouts.

“My children are looking forward to it very much, since I promised them I would bring it,” said Kiska. “I believe it will last as long as possible and we will take care of it, to give us love for the whole of Christmas time.”

The Bethlehem Light was delivered to Slovakia from Vienna. On December 17 Slovak scouts will start distributing it all over the country in order to deliver it to over 330 towns and villages. The Bethlehem Light will also go to villages that have no train connection so that as many people as possible will have access to it. Scouts will distribute the light until Christmas Eve. On December 18 they will carry it up to Lomnický Peak, which is the highest inhabited place in Slovakia.