The president finds the declaration initiated by PM Robert Fico to be insufficient, proposing that it be scrapped. 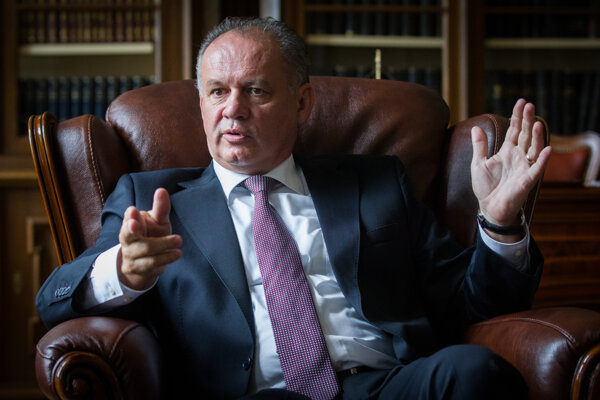 The declaration by which parliament condemned Vladimír Mečiar’s 1998 amnesties did not bring justice; instead, parliament should abrogate the amnesties with a constitutional law, President Andrej Kiska said on RTVS’s talk show ‘O 5 minút 12’ (Five Minutes to Twelve) on December 11.

Kiska finds the declaration initiated by Prime Minister Robert Fico (Smer) to be insufficient. It has only deepened the pain of those people who have suffered injustice in the past.

“The declaration does not mean justice and if such a heavy intervention occurred in which the state organised the kidnapping of the president’s son, I think that the political will should actually be found to resolve it,” said Kiska. “Mečiar’s amnesties should be scrapped with a constitutional law to bring about a win for justice.”

The president rejected the initiative by Parliamentary Chairman Andrej Danko (SNS), who called Kiska to file, jointly with him and Prime Minister Fico, a motion to the Constitutional Court on this issue.

“Only parliament has the right to assert a constitutional law with a two-third majority,” said Kiska in reaction to Danko’s initiative. “It is impossible to turn to the Constitutional Court with a hypothetical question.”

Kiska does not think that scrapping the amnesties would cause legal chaos as claimed by its opponents.

“It definitely won’t be easy. However, the fact that the law has been passed to its second reading shows there is the political will there,” said Kiska. “If an absolute majority in parliament perceives it like this, i.e. that it is solvable, it is now up to the other political parties to take it and be willing to resolve the problem.”

Parliament, on December 6, passed with 88 votes the wording of a declaration condemning the 1995 kidnapping of then president Michal Kováč’s son Michal Jr. abroad and the 1998 amnesties issued by the then prime minister and acting president Vladimír Mečiar, which halted all law enforcement activities relating to the case. The kidnapping was described as a gross violation of human rights and fundamental liberties and an act that damaged Slovakia’s reputation.

Meanwhile, the opposition’s proposal to declare the amnesties null and void passed to its second reading after receiving 78 votes.

Slovak President Andrej Kiska has turned to all MPs, in connection with the recent death of former president Michal Kováč, calling on them to do something about such shameful acts as the kidnapping of the president’s son and the murder of Robert Remiáš. Remiáš is said to have known too much about the kidnapping. Prime Minister Fico and Speaker of Parliament Danko believe that there is no legal way to scrap the amnesties.