Minister is critical of next year’s budget, medical workers say it comes too late.

“I am afraid that the current sum of money [allocated] for health care is not enough,” said Health Minister Tomáš Drucker when commenting on next year’s budget.

His department will be the only one to receive less money than in 2016, which may limit the provided treatment and slow down the necessary reforms in the sector, according to trade unionists and representatives of medical staff.

The Health Ministry will receive more than €1.37 billion in 2017, a drop of nearly €120 million year on year, according to the state budget approved by the parliament in late November.

Though the current management accounts for savings, the ministry plans to use the money to cover other expenditures in the sector, some of which may be very high. The Council for Budgetary Responsibility even predicts that the risks in the sector may add up to as much as €236 million, said its member Ľudovít Ódor in an interview with the Sme daily.

Though the MPs also approved a €50 million reserve for health care, Drucker does not consider it enough.

“It is necessary to have enough finances to prevent the collapse of the system,” he said, as quoted by the TASR newswire, adding he wants to talk with the Finance Ministry concerning additional resources. 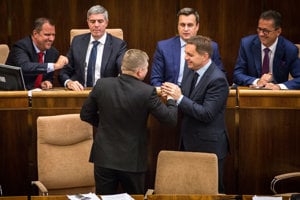 Read also:Parliament adopts 2017 budget Read more
Sorry, you have just exceeded the allowed number of devices
This subscription grants access to the locked content of Spectator.sk and SME.sk for only one person through a maximum of three different devices or browsers.
To continue reading the article on this device, please update the list of devices in the profile settings.
Administer devices
You can read everything about device settings here.